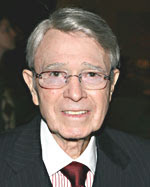 Longtime Variety columnist Army Archerd, who began his covering the entertainment world in 1945, and began his stint at the venerable trade magazine in 1952, working even after his column ended in 2005 as an industry blogger, which ran until July of this year, and was often seen hosting the red carpet at the Oscars, died today of a rare form of cancer.

You can read all the details over at Variety, I just wanted to comment on Archerd's passing briefly because of the old fashioned class I always associated with the man. Archerd was a product of old Hollywood, an era of glamorous stars and big marquee names, and he retained much of that respectful attitude toward a world full of wonder.

That doesn't mean he wasn't afraid to speak his mind, as he often did. But Archerd was a different kind of reporter, cut from a cloth they just don't make anymore. As Anne Thompson said on Twitter, it's the end of an era. He was the last of his kind, and he will be missed.
Email Post