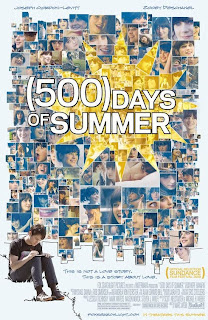 I would be very easy to dismiss Marc Webb's feature directorial debut, (500) Days of Summer, as just another precious indie for the Garden State crowd. Which in many ways it is. Hollywood has found a way to capitalize on this growing sub-genre of quirky romances aimed at hipsters, churning them out with the same soulless corporate mentality they allow their mindless blockbusters, except here the use of an acoustic indie rock song is equated with emotional depth.

This cynical trend to capitalize on twentysomething melancholy officially jumped the shark with Sam Mendes' Away We Go earlier this year, but thanks to Webb's assured and capable hands has been returned to some semblance of respectability with (500) Days of Summer.

It has all the ingredients one would expect - quirky characters with affinities for certain indie rock bands, cutesy line drawings, and a healthy dose of melancholic introspection. This time, however, Webb has the good sense to actually imbue his film with actual insight into life and love, instead of using acoustic rock as a cure all Band-Aid. 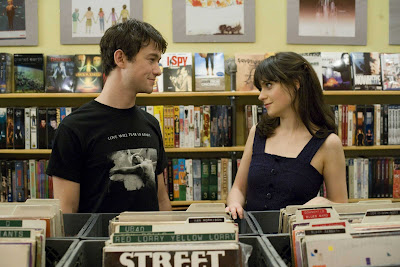 The narrator makes it very clear up front that this is not a love story. And it's not...well, not really. (500) Days of Summer is an anti-love story, an examination of how it all went wrong for Tom Hansen (Joseph Gordon-Levitt), a twentysomething greeting card writer who falls head over heels for his boss' new assistant, Summer Finn (Zooey Deschanel), an enigmatic free spirit (is there any other kind?) who doesn't believe in love. Tom is infatuated almost instantly once he discovers that they share a mutual love for the band The Smiths, and makes it his goal to win her heart. But Summer has other plans, and while their relationship resembles that of boyfriend and girlfriend, eventually it becomes painfully clear that both are looking for different things, and the relationship ends in heartbreak for Tom.

The film recounts that relationship in a non-linear fashion, looking back over the good times and the bad, to paint a painfully realistic picture of a failed romance. Over the 500 days from the time he meets her until the time he finally learns to move on, the film examines their ups and downs, actually taking the time for a serious and mature look at why love fails. Despite its well chosen soundtrack, we are never left with the feeling that the songs are replacements for actual insight. While (500) Days of Summer stops short of profound, it is a very rare thing to find a film that is this honest and open about modern relationships. 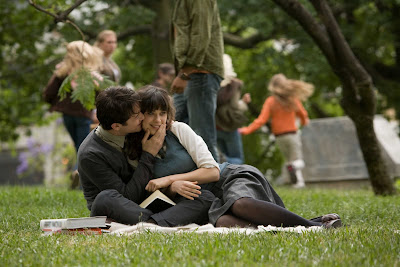 Much of the credit lies with Scott Neustadter and Michael H. Weber's surprisingly sophisticated screenplay, that treats young heartache with both tenderness and clear-eyed honesty. It doesn't wallow in its moroseness or look down its nose at what are obviously real feelings, nor does it act like it's deeper and more profound than it actually is. It keeps everything in perspective while bringing a refreshing point of view to the table - love isn't always what you see in the movies. It's messy, complicated, and the boy doesn't always get the girl in the end.

As such, (500) Days of Summer is surprisingly successful in its aims, walking a fine line between offbeat comedy and beautiful melancholy. The winning performances of Gordon-Levitt and Deschanel hammer it all home, providing two real, three dimensional human beings, both flawed and both wholly believable and readily recognizable. There is a simple and almost effortless beauty at work here. And while I don't want to ascribe any great importance on the film that simply isn't there, its combination of optimism and practicality is both a refreshing and welcome change to the daily cinematic grind.

Jasmine said…
Great review. I especially like your analysis of the saturation of indie-alt quirky romcoms.
9:38 AM