For a filmmaker who has spent much of the last decade grappling with his personal life on film, The Novelist's Film, Hong Sang-soo's third feature film to be released in the US this year (following Introduction and In Front of Your Face), is arguably his most personal and nakedly emotional to date. 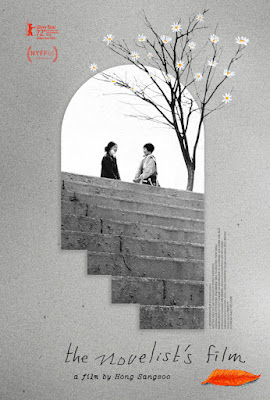 It's also one of his most loosely structured works - a tall feat for a filmmaker whose output often consists of people sitting around tables having mostly improvised conversations. And in that regard, The Novelist's Film might just be the most "Hong" film Hong has ever made. The "plot" centers around a novelist named Junhee (Lee Hye-young), who after a series of chance encounters with a filmmaker (Kwon Hae-hyo) and an actress (Kim Min-hee), both of whom are struggling with their craft, decides to make the film herself with Min-hee as the star - creating a process of artistic collaboration that mirrors Hong's own improvisational style.

Hong's films have often directly or indirectly commented on his personal life and his career, but never quite so directly as it does here, as he deftly blurs the line between fiction and reality in the film's final moments. It's as if Hong is somehow trying to both atone for old transgressions and begin anew, not just as a new person but a new filmmaker. That the denouement is so tonally and stylistically different from anything in the filmmaker's oeuvre thus far is telling, and the execution makes for one of the most emotionally exhilarating moments of his career. It's such a jolt, especially for longterm fans of Hong, to see him switch from black and white to color, from fiction to seeming documentary in the form of the titular novelist's film. It's moment of such raw beauty, a gently poetic ode to his muse, Kim Min-hee, and a nod to the audience about the transformative power of cinema.

That may seem like a cliche, especially when films about the magic of movies seem all the rage right now, but Hong doesn't overplay his hand here, letting the change in style and form reinforce his ideas. Viewers miles may vary, and anyone who has ever seen a Hong film and weren't engaged will likely not have their minds changed by The Novelist's Film. It is, after all, mostly a series of conversations - characters exchanging pleasantries, getting to know one another, and shearing their respective philosophies on life and art. But it's also one of Hong's most deeply felt works, a kind of mea culpa and act of personal renewal. Longterm followers of the filmmaker will find themselves greatly rewarded as he reflects on his life, work, and legacy with the grace of a true master of the craft.