If there is any modern filmmaker who has earned an autobiographical reflection on the transformative power of cinema, it's Steven Spielberg, a filmmaker who has become perhaps the most readily recognizable director of modern times and the creative mind behind some of the most iconic films of the last 50 years. 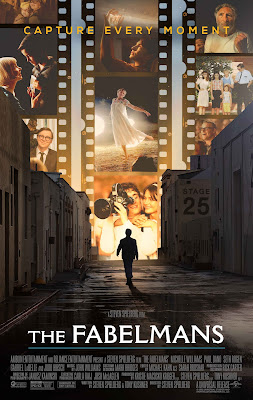 Spielberg is in many ways the man responsible for the modern blockbuster - his Jaws shattered box-office records in 1975 and redefined how studios released and marketed films. In many ways, he is the quintessential American filmmaker of the modern era, embraced as a master craftsman and dismissed as a populist hack by cinephiles in often equal measure. Count me in the former camp, because even when Spielberg is having an off day, his work is still 10 times more interesting and assured than just about anything else in mainstream American cinema right now.

So for Spielberg to sit back and reflect on what brought him here is in some ways the perfect summation of career. Spielberg IS the movies, and The Fabelmans is his heartfelt ode to the movies, and the people, who made him. Spielberg's fictional avatar is named Sam Fabelman (Gabriel LaBelle), a Jewish teenager growing up with a father (Paul Dano) who loves science and a mother (Michelle Williams) who loves art, whose conflicting points of view will ultimately shape both his vision and his work ethic. Sam dreams of being a filmmaker, his encounter with Cecil B. DeMille's The Greatest Show on Earth shaping him from an early age. He makes movies in his back yard with his friends, a pastime encouraged by his mother but dismissed as a hobby by his father.  As the family begins to drift apart, Sam keeps his eyes on the movies, eventually leading him to the CBS backlot and a fateful encounter with one of his idols, legendary filmmaker John Ford (David Lynch).

Those who are familiar with Spielberg's story may not find any surprises here, but what makes The Fabelmans such a powerful experience is the tenderness with which Spielberg reflects on his own upbringing, and the people who shaped him for good and for ill. Spielberg's films have often dealt with single parent families and children of divorce, and here for the first time he confronts his own. It's warmhearted, but not nakedly nostalgic in the way one might expect from Spielberg. Clearly he has fond memories of this time in his life, but it's also a film filled with sadness and regret - moments where perhaps he wished he'd acted differently, spoken up, spoken out. It's a frank and often heartfelt reflection on the birth of an artist told by the artist himself, and a tribute to the loving and imperfect family who made him the man, and the filmmaker, he is today.

It is also perhaps Spielberg at his most playful. There are moments of such sheer joy that you can almost feel that young man with the Bolex camera making home movies in his back yard still having the time of his life making movies - still in awe of their power, and his role in bringing them to life. Some of these moments almost feel so self-referential as to be incongruous with the rest of the film, little moments of Spielberg breaking the fourth wall and nodding to the audience from behind the camera. But there's such a sense of elation behind them, and one can't help but stand back in wonder at the mastery of Spielberg's craft. Co-written by Tony Kushner and set to the strains of John Williams' achingly tender score, The Fabelmans feels like the culmination of one of Hollywood's most celebrated careers. But it also feels like the work of a filmmaker refreshed, as he grapples with ideas and themes that have lurked in the periphery of his work since the beginning. Here he brings them to unforgettable life, through the power of the art he loves so much, a love that radiates out of every misty-eyed frame.