There's no filmmaker working today who can craft such deceptively simple emotional powerhouses as Hong Sang-soo, a director seemingly becoming more and more preoccupied by half-improvised, written on the fly hangout movies that he churns out at a rate of two a year that are almost always more than they appear to be on the surface. 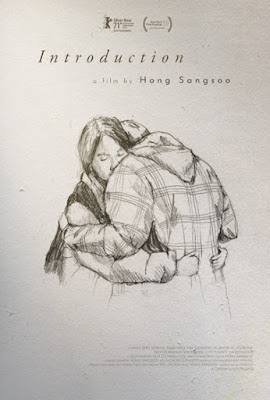 In his latest, Introduction, may seem to be one of his loosest yet, held together by the simplest of ideas, and featuring a few loosely connected  characters having mundane conversations. The elements Hong presents here shouldn't work, and in the hands of a lesser filmmaker they probably wouldn't. But Hong has always been a filmmaker preoccupied by subtle shifts in time, reality, and perception; and in Introduction  he is far more interested in what the characters don't say than anything they do.

We open with a young man named Youngho (Shin Seok-ho) being summoned being summoned to his father's office for an important conversation; a conversation that, due to an interruption by a famous actor (Ki Joo-bong) never takes place, but nonetheless has profound affects on the direction of Youngho's life. Youngho, it turns out, has recently moved from South Korea in pursuit of his girlfriend, Juwon (Park Mi-so), who is studying abroad in Germany. Juwon is navigating the world on her own for the first time, and seems overwhelmed by the big city. Along the way, all of them will come to major decisions that are never spoken aloud  - their lives diverging because of a series of ostensibly prosaic decisions whose ripple effects has profound consequences for them all.

Hong never spells out his themes, and if you're not paying close attention you're likely to come away with the impression that nothing of consequence happens in Introduction  And that's precisely the point, our lives are governed by a series of small decisions which may seem of no consequence, but have a kind of "butterfly effect" power to wholly change not only our own lives, but the lives of those around us. Having moved away from the series of films grappling with the fallout of his very public affair with actress Kim Minhee (who appears here in a small role), Hong seems increasingly preoccupied with the humdrum day-to-day banalities of human existence, resulting in evermore inchoate, inscrutable films, many often only an hour or so long. But it is precisely that hangdog, shot-on-the-fly aesthetic that makes them so remarkable. Introduction is more on par with Grass, The Woman Who Ran, and Claire's Camera than On the Beach at Night Alone or Right Now, Wrong Then, with its disparate characters simply trying to navigate the same space without any readily obvious conflict, but those who stick with it and are able to tune into its particular rhythms will be richly rewarded by its disarmingly emotional observations about how the choices we make affect our lives.

Opportunities missed lead to opportunities taken, words left unspoken can have as powerful an effect as words actually spoken, and life pushes inevitably onward in spite of our best laid plans. It's another deeply perceptive study of fate and human nature from one of the foremost cinematic observers of the human condition. The most powerful emotional beats of Introduction lie in its negative spaces, in silences and between words while life's "important" moments sail by. The beauty is in the in between, and no one conveys that more beautifully or more achingly than Hong Sangsoo.