After suffering the untimely death of its lead actor and a troubled production  that endured multiple shutdowns due to COVID scares, it's something of a small miracle that Black Panther: Wakanda Forever exists at all. Black Panther was in many ways the most successful film the MCU has made to date. It was outgrossed by Avengers: Endgame, but it made up for that in critical acclaim and unprecedented attention at the Academy Awards, becoming the first superhero comic book movie to be nominated for Best Picture - ultimately going on two win three Oscars for Best Original Score, Best Costume Design, and Best Production Design. 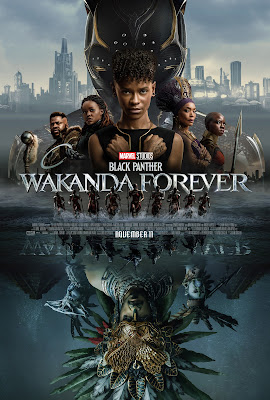 Following up that level of success is no small undertaking, especially given the obstacles it had to overcome in order to make it to the big screen. Chadwick Boseman's death in 2020left the future of the franchise uncertain, and director Ryan Coogler wisely chose not to recast, and instead kill off his character T'Challa and have the characters left behind grapple with his death.

The film begins with T'Challa's funeral, and sees his mother Ramonda (Angela Bassett) ascend the throne of Wakanda. T'Challa's death has brought new scrutiny on the mythical African nation, as world power vie for Wakanda's most precious resource - Vibranium, an indestructible metal only found beneath its soil. But when the US develops a Vibranium detector that finds the precious metal on the ocean floor, an ancient underwater civilization rises up to stop them, seeking to kill the scientist who developed the machine in order to keep their existence a secret. The scientist, it turns out, is a college girl, now under the protection of Wakanda, who will do anything to protect her, even if it means going to war.

Like its predecessor, Wakanda Forever grapples with ideas of colonialism and oppression in ways that are often much more explicit than what you'd normally see in a studio tentpole of this size. Here, two historically oppressed civilizations face the prospect of going to war with each other or helping protect each other against the incursion of colonizers who seek to exploit their resources. But the film almost needs a stronger outside villain to threaten the both of them to really solidify its ideas. There are some hints of those ideas - mainly in the form of Julia Louis-Dreyfus' kooky CIA director, but her subplot is mostly played for martial discord comic relief with Martin Freeman's agent Ross, and just adds to the already bloated runtime rather than adding anything to the story.

Boseman's presence is indeed sorely missed, and the film is at its best when it's paying tribute to him. But those moments are unfortunately few and far between. The war storyline, which ends up boiling down to Shuri (Letitia Wright) seeking revenge against Namor (Tenoch Huerta), results in some strangely messy action sequences that are often under-lit and jarringly edited. Angela Bassett manages to rise above it all, however, delivering a barnstorming performance that will make you wish she'd get cast in more movies. But the film just kind of feels lost without Boseman, and it's telling how much it comes to life just from seeing flashbacks to the original Black Panther. The fact that it seems so disinterested in the rest of the MCU as a whole is certainly to its credit, but like Wakanda itself in the wake of T'Challa's death, it feels a bit adrift. One can't help but wish that it would have embraced that idea more thematically rather than practically - because Wakanda Forever feels overstuffed, filled with interesting ideas and possibilities that never fully come into focus.