The Banshees of Inisherin feels like a return to form for director Martin McDonagh after the decidedly uneven Three Billboards Outside Ebbing, Missouri. Filming for the first time in his native Ireland, McDonagh feels altogether more at home in this milieu, setting his of broken friendship and even more broken humanity on the fictional Isle of Inisherin off the coast of Ireland in the 1920s. 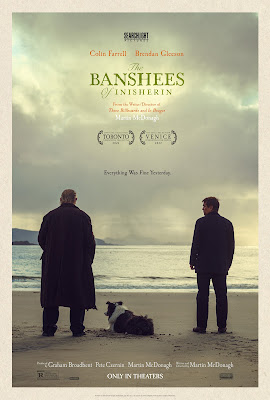 While the Irish Civil War rages on the mainland, the citizens of Inisherin seem trapped in a kind of idyllic purgatory, surrounded by breathtaking beauty, but trapped by their own anxieties and adrift in a kind of aimless ennui. Pádriac (Colin Farrel) and Colm (Brendan Gleeson) are the best of friends, that is until Colm decides he no longer wants to be friends with Pádriac, and insists he stay away from him. Perplexed, Pádriac sets out to find out why his best friend no longer likes him. Frustrated by Pádriac's continued advances and wishing only to be left alone with his music, Colm threatens to cut off one of his own fingers every time Pádriac speaks to him, an ultimatum that will end up changing the course of both of their lives forever.

The Banshees of Inisherin unfolds like a folk tale, full of warmth and wit, and populated by wonderfully idiosyncratic characters who live on the odd little island, but it's also filled with a sense of longing and melancholy, aching for meaning and connections in a world seemingly gone mad. McDonagh excels at combining tragedy and dark humor, and in that regard the film is a triumph on all fronts. It is easily the saddest film he's ever made - there's a world-weariness that surpasses everything he's ever done before, but it's never fatalistic, even as it seems to mourn humanity's seemingly innate capacity for self destruction.

Is there a glimmer of hope at the end? Perhaps. McDonagh doesn't hold our hand here and that's part of what makes the film so wonderful. We're desperately hoping for a happy ending - and the film never truly gives us the closure that we or the characters seek. It's full of uncertainty and doubt, but also possibility. I was reminded somewhat of a moment from Todd Field's Tár, also currently playing in theaters nationwide - in which Cate Blanchett's imperious conductor asks; "the only question then, is what are YOU going to do about it?" McDonagh pulls back and looks at the audience in the final moments and confronts us with that very question. The glimmer of hope derives totally from each audience member's perspective, and as such - a group of 50 people could watch this film and come away with 50 different perspectives on the ending.

Make no mistake, The Banshees of Inisherin is a profoundly sad film, but McDonagh makes sure we're at least able to laugh at the results of our own human foibles. If we must laugh to keep from crying, then The Banshees of Inisherin insists we do both, often at the same time. It's McDonagh's most accomplished work as a filmmaker - less uneven than Three Billboards and more ambitious in theme than In Bruges. In fact it feels like a combination of the best parts of both films, with a lush Irish setting to ground and focus McDonagh's creative sensibilities, and bringing back Farrell and Gleeson for another, more somber reflection on friendship, aging, and the inevitability of mortality that feels like a synthesis of McDonagh's career up to this point.