Glass Onion, Rian Johnson's sequel to his hit 2019 whodunit, Knives Out, might be one of the most egregious examples of a studio completely botching a theatrical release in recent memory. With Netflix sticking to its guns about about focusing on streaming releases over theatrical ones, Glass Onion received a token one-week theatrical release, and will be pulled on Wednesday, November 30, with a streaming premiere on Netflix a month later on December 23. 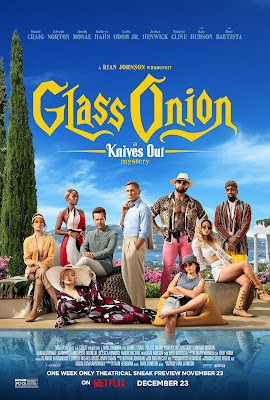 It's a shame because the film is clearly a hit, if reports of sold-out screenings across the country on Twitter are any indication. Even as a supporter of shrinking windows between theatrical and streaming releases, it seems odd to me to yank what is by all accounts a very popular film out of theaters after only a week. Perhaps it will serve as word of mouth for the eventual Netflix premiere, but it's clear that audiences are hungry for something like Glass Onion, and Johnson indeed delivers the same brand of clever muder mystery fun as he did in Knives Out.

This time, Detective Benoit Blanc (Daniel Craig) has been summoned to the private island of tech billionaire, Miles Bron (Edward Norton) for a murder mystery game with some of his closest friends. The game soon becomes all-too-real when a guest is murdered in a crime seemingly targeted at Miles. Miles, it turns out, scammed his business partner, Cassandra (Janelle Monáe) out of her share of his company, and all their friends helped him cover it up. There's an opportunistic governor running for Senate (Kathryn Hahn), and air-headed pop star (Kate Hudson), an alt-right streamer (Dave Bautista), and Miles' chief developer (Leslie Odom Jr.) along for the ride, and each one naturally has a reason why they're dependent on Miles, and also a reason why they're invested in his death. Only Benoit Blanc can unravel this real-life mystery, but only with help from an unexpected source.

Like its name suggests, Glass Onion provides mysteries within mysteries, and Johnson serves them up with a healthy side dish of social commentary that could not have been more perfectly timed. As the clueless billionaire who built his empire on the backs of much smarter people, Norton is such a transparent lampoon of Elon Musk that Musk's hapless takeover of Twitter coming just before the film's release feels like a gift from the movie gods. Like its predecessor, Glass Onion eats the rich with relish and a side of chips, but there are few filmmakers out there with their finger so incisively on the pulse of the culture than Johnson. Every joke seems ripped directly from Twitter discourse, but it never feels like it's relying on the insular humor of the terminally online. Johnson's screenplay is consistently fleet-footed and funny, deftly peeling back the layers of the story and having a blast doing it.

So too is the cast, who are all clearly having the time of their lives and their enthusiasm is infectious. Each of their characters is instantly recognizable and ring with such truth that it's easy to forget they're parodies. Johnson isn't just rehashing Knives Out here, he's expanding its horizons with a new visual palate and style and a whole new cast to give Blanc new foils to play against. This is one franchise I would be happy to see continue indefinitely, if Johnson can continue to maintain this level of freshness; like a modern answer to The Thin Man, with its sparkling dialogue, copious amounts of alcohol, and a new setting and mystery each time. Benoit Blanc is just such a fun character, with his mint julep southern drawl and impeccable sense of style - there's just nothing else in the genre quite like him. He's both a parody and a fully fleshed out character, and he and the rest of the stellar cast make Glass Onion a complete delight.