Hong Sangsoo's films have a way of working their way almost imperceptibly under his audience's skin, the emotional underpinnings slowly making themselves known often before you're even aware of what's happening. His latest work, In Front of Your Face (his second feature to be released in the United States this year), is no different in that regard, but it's also perhaps one of his most nakedly emotional works.

That may seem like a strange adjective to use for a filmmaker like Hong, whose work is often characterized by characters having seemingly mundane conversations that are never quite what they seem to be on the surface, and those who have had difficulty connecting with his particular languid style will likely have no more to latch onto here than in his previous films. But as its title states, the emotional core of its themes are very much in front of your face. 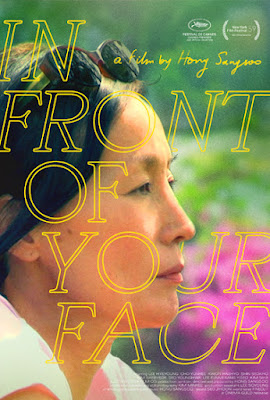 The film centers around Korean ex-pat, Sangok (Lee Hyeyoung) who returns from the United States to visit her sister, Jeongok (Cho Yunhee) in Seoul. They reminisce about their childhoods, about their time in their  respective countries, and reflect on Sangok's time as an actress years earlier. As they wander around the city, visiting their childhood home and dining in cafes (a Hong favorite), Sangok eventually meets with a film director (Hong stalwart, Kwon Haehyo) to discuss returning to acting. It is only then that true nature of her visit becomes clear.

It's a deceptively simple film, told through a course of unassuming encounters that ultimately become something wondrous. Lee Hyeyoung, a popular Korean theatre actress, makes her debut with Hong (who is known for often working with the same core group of actors) and delivers a subtly heartbreaking performance filled with wistfulness and longing, her presence lingering like a fine morning mist as she languidly takes in the beauty all around her. It's no coincidence that In Front of Your Face is Hong's most colorful film in quite some time, stepping away from the monochrome black and white of The Day After (2018), Hotel by the River (2019), Grass (2019) and Introduction (2022) into a world of vibrant greens. That's because the film its perhaps the filmmaker's most direct confrontation with mortality yet - an attempt to step back and take account of life and the beauty all around. It's also his first film since 2016 made without his partner and muse Kim Min-hee in front of the camera (she's credited here simply as a production assistant). As a result the film feels somewhat different from much of his recent work - not necessarily for better or worse, but after spending several films grappling with the high profile scandal surrounding their relationship, In Front of Your Face finds Hong in a somewhat more reflective and sentimental mood. The themes are written in a much bolder font than his usual work, but his style remains as delicate and ephemeral as ever - not so much about characters coming to conclusions but making small discoveries along the way to undetermined ends.

Life as depicted in a Hong Sangsoo film may not have easy answers or neat conclusions, but its beauty is right there in front of your face; messy, unknowable, and yet devastatingly, unmistakably beautiful.