The MeToo movement was perhaps one of the most seismic cultural shifts of the century thus far - its wide reaching consequences bringing down many powerful men and exposing a culture of silence and indifference toward sexual harassment that is systemic in nearly every industry and walk of life.

One of the first, and perhaps the most high profile, victories of the MeToo movement was the downfall of notorious Hollywood producer, Harvey Weinstein - whose public shaming and subsequent criminal conviction helped inspire countless women to come forward and share stories of their own abuse at the hands of powerful people. 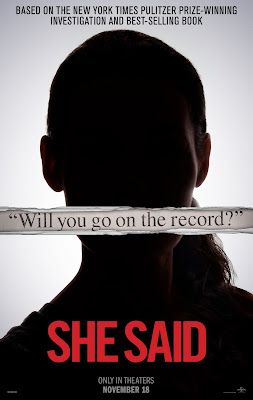 Maria Schrader's She Said tells the story of how Weinstein's abuses were  investigated and reported on by Jodi Kantor (Zoe Kazan) and Megan Twohey (Carey Mulligan), a pair of New York Times journalists who took  on the story and refused to give up in the face of immense pressure to let it go. Facing a group of terrified women who are either afraid to speak out or  muzzled by strict non-disclosure agreements, Kanto and Twohey work around the clock (each juggling newborn babies) to bring the story to light and end Weinstein's reign of terror in Hollywood.

It is, of course, a fascinating story, and an important one to tell. The film struggles in the first act, however, hampered by an overly expository script that bogs down the pace makes the otherwise fine performances come across as stilted and dour. When a characters sound more like they're talking to the audience than each other, you have a problem. It's trying pack so much exposition into the dialogue instead of trusting the audience to pick up the details on their own. Once the investigation gets underway, the film finally finds its groove and the women start telling their stories. That is, of course, the heart and soul of the film, and Schrader treats them with the gravity they deserve. Those moments are some of the film's most powerful (Samantha Morton makes the biggest impression in a single scene), and Schrader wisely chooses to focus on the women's voices rather than showing the actual moments of abuse. Where possible, the film even casts the actual victims as themselves, including Ashley Judd (who appears as herself onscreen) and Gwyneth Paltrow and Judith Godrèche (who provide their own voices in phone calls), lending their stories an even greater sense of gravity.

It will inevitably invite comparisons to the Oscar winning Spotlight, another film about intrepid journalists working on a story about a sex scandal, and while She Said isn't quite on that level, in manages to not be piece of self-congratulatory Hollywood pabulum about how they came together to defeat sexual harassment. The film focuses primarily on the Weinstein story rather than the MeToo movement as a whole, and that tight focus allows Schrader to both tell a compelling story and give the women's stories the space they need to breathe. By telling this story specifically from women's perspectives, She Said ensures that the story is respectfully and fully told. Schrader focuses on details a male director might overlook - the way the journalist's juggle the mundane day-to-day tasks of being a mom, the focus on details in the room where the abuse happens rather than the abuse itself, and its cathartic sense of feminine camaraderie against a seemingly untouchable foe. It makes for a more engaging and emotionally astute film - managing to mostly overcome its rocky start to explore an important moment in recent history without feeling like homework, while refusing to ignore the fact we still have a long way to go.