It's remarkable that the same filmmaker managed to release a film as elegantly and tightly and playfully constructed as The Last Duel and also one as turgid, unfocused, and bloated as House of Gucci in the same year, but that's just what Ridley Scott has done with his newest release. 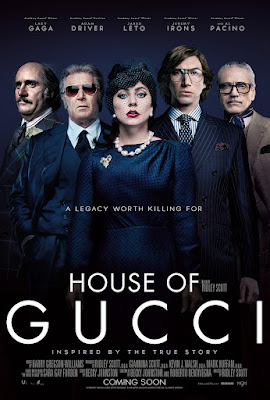 House of Gucci is a fascinating mishmash of tones and styles that never quite jells into a satisfying whole, but that also doesn't mean that it isn't a intriguing failure. For all its glamorous excesses, hammy performances, and pulpy premise, the film remains a curiously understated affair, as if the actors completely understood the assignment but Scott seriously misjudged the tone - crafting a serious crime thriller when the material simply begs for a more lurid approach.

For a tale of intrigue and murder set against the backdrop of the fashion industry, House of Gucci remains curiously staid. The pacing is just so uneven, it's as if every shot is a few beats too long and in need of sever tightening. It feels like an assembly cut that hasn't yet been shaped into its final form. None of this is the fault of the actors, who are uniformly spectacular. Lady Gaga owns the screen, and Jared Leto is having an absolute blast as the sad sack goofball Gucci cousin, Paolo - existing somewhere between the Goodfellas and "It's-a me, Mario!" House of Gucci is an absolute showcase of over-the-top, capital A acting and it's often a wonder to behold. So much emphasis is placed on naturalism that its something of a marvel to see such an assembly of  delicious hams on screen who seem to instinctively understand the pulpy tone of the material.

The problem is that's not the film Scott seems to be directing, and he never really allows himself to indulge in the story's natural sensationalism. House of Gucci could have used more of the batshit verve of Scott's own The Counselor, but he never really goes there, treating more like a straightforward crime drama in the vein of All the Money in the World, a film that felt much more confident and cohesive than anything on display here.

Examining House of Gucci as part of Scott's 2021 output, it is almost the exact same length as The Last Duel - yet that film feels swift and fleet while Gucci feels stilted and plodding. Which is a shame considering the quality of acting happening on screen - Gaga, Leto, Pacino, Driver, and Irons are all a blast to watch, but they're trapped in film that cannot match their energy. The performances are worth the prices of admission, but as a whole House of Gucci feels like a giant missed opportunity - a tale of scandal and extravagance that plays it all too safe and straight, while the actors provide a tantalizing glimpse at what could have been.