Reigning Best Director Oscar winner Chloé Zhao may seem like a curious choice to helm a Marvel superhero film, considering that her three previous films are all small scale, naturalistic dramas that often cast non-professional actors to play a version of themselves. And while Eternals has become the lowest rated MCU film on Rotten Tomatoes, I can't escape the feeling that there's something special at work here that we haven't seen from the MCU before. 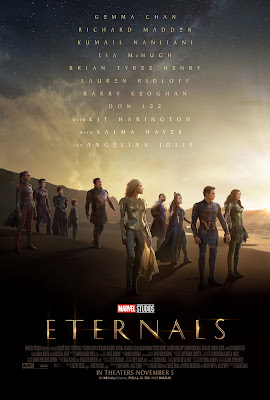 That's not to say that Marvel has changed its spots - its formula is still very much there. But Eternals  moreso than any other MCU film, is able to maintain the unmistakable stamp of the filmmaker behind the curtain. Is it a human drama on the level of The Rider or Nomadland? No, it isn't. But it isn't necessarily meant to be. This is a superhero film, after all. But Zhao, acting as both director and co-screenwriter, has managed to ground both the action and the characters in ways no other MCU filmmaker has quite been able to do.

That's no small feat for a film about a race of immortal beings that have been sent to earth to protect it from primordial monsters called the Deviants in the name of the gods (or Celestials, as they're called here). These beings eventually became the stuff of legends, their stories becoming myths and religions of the ancients, passed down for generations, until the present time when the Eternals live in secret amongst us, concealing their powers until the Deviants re-emerge. And re-emerge they do, bringing the team back together to save the Earth once again. This time is different, however; not only are the Deviants stronger than ever before, their presence finally brings the true purpose of the Eternals' mission on earth to light, and to be successful in their purpose the world must end.

This allows Eternals to explore the morality of the heroes' mission, and it isn't black and white. What happens if the mission that the so-called good guys have been sent on actually makes them the bad guys? Have their actions to protect humanity actually hurt them? It's intriguing moral gray area for an MCU film to explore, and Zhao grounds it with naturalistic lighting and disarmingly quiet character moments. This is the first MCU film that truly takes its time setting up its action sequences rather than barreling from one set piece to the next. Sure, it's exposition-heavy, and introduces a ton of new characters, but Zhao actually takes the time to set them up and make the audience care about them. That the film allows their relationships to grow, even across millennia, is something altogether remarkable. And while its inevitable sequel setup and typical post-credits silliness blunt the overall impact somewhat, Eternals is, for the most part, a thoughtful and earthy epic that dares to ask big questions and acknowledge its characters' weaknesses. If this is the future of the MCU, I'm far more encouraged by this than anything its given us previously. More of this, please.