There's a certain satisfaction inherent to watching a Ridley Scott historical epic that's firing on all cylinders. And while this is a genre with which he's often identified, thanks to his Oscar winning Best Picture, Gladiator, his track record here is fairly spotty. 1492: Conquest of Paradise is perhaps his worst film, while Robin Hood and Exodus: Gods and Kings have mostly been forgotten, and Kingdom of Heaven was much more well received in its home video directors cut than it ever was in theaters. 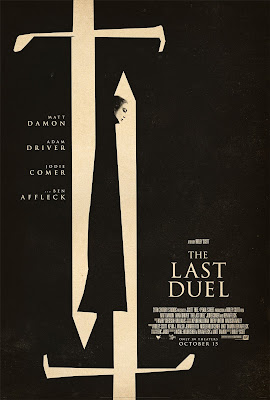 That's why it's so thrilling to see him in such clear command of his craft as he is in The Last Duel, a medieval riff on Kurosawa's Rashomon that examines a real life case from the 1300s involving an unpopular knight whose wife accuses accuses the local lord's most favored squire of rape, resulting in a trial by combat that would settle the verdict in the eyes of God.

Scott examines the story from three different perspectives, first through the eyes of Jean de Carrouges (Matt Damon), who is mostly preoccupied with accumulating lands and titles that he feels are owed to him; then through the eyes of Jacques Le Gris (Adam Driver), the accused squire who sees himself as a benevolent Don Juan attempting to rescue Margueritte de Carrouges from a life of marriage to the petty Jean; and lastly from the point of view of Margueritte de Carrouges (Jodie Comer) herself, a lady with little societal agency who finds herself caught between the ambitions of two preening men vying for influence in a patriarchal world.

The Last Duel is naturally sumptuous to look at, with gorgeous production and costume design by frequent Scott collaborators Arthur Max and Janty Yates, but it's the performances that really sell the film. Each telling of the story is so full of exquisite details and shadings, with the performers subtly adapting their characters to match the perspective of their rivals. The way the same events are depicted, tweaking even this most seemingly mundane of details, is so important to the bigger picture and discerning who is telling the truth. By the time we get to the climactic showdown, which could result in Margueritte's execution for bearing false witness if her husband loses, the film has become such an incisive metaphor for the way men bulldoze the perspectives of women in their quests for self advancement. de Carrouges isn't upset that his wife was raped, he's upset about what people will think of him, and uses the crime to settle a score with an old rival rather than seek justice for his wife, whose life hangs in the balance.

Each character views the events through their own respective lens, each event colored by their own inherent biases. Either de Carrouges is a noble martyr unfairly hindered by nepotism, a preening, insufferable boor, or a petty, vindictive man seeking vengeance at all costs for perceived slights. And Scott, working from a script by Nicole Holofcener, Ben Affleck, and Matt Damon, deftly navigates the shifting perspective with disarming grace. It's a rousing, old fashioned epic; but it's also a thrillingly modern exploration of the politics of gender, and how the truth is often obfuscated by our inability to see the bigger picture. Its one of the most fleet-footed and agile two-and-a-half hour films that have come along in quite some time. Every moment is earned; every look, gesture, and performance is important, and it more than earns its epic running time. It's Scott's best film in many a moon, and what a treat it is to see him once again painting confidently on such a grand and sweeping canvas.