There's been some controversy in certain circles of Twitter regarding the decision to make Richard Williams, father of Venus and Serena Williams, in a film about their unlikely rise to superstardom, but given the involvement of the Williams sisters in the production of the film, it's easy to see why they chose the honor the man who fought so hard for their success. 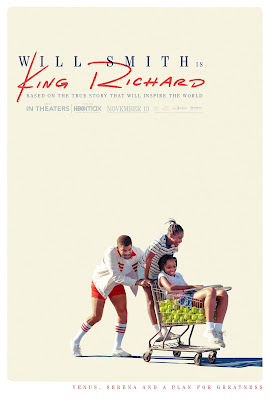 Indeed, Richard Williams was the driving force behind Venus and Serena's legendary career trajectory, that ultimately led them to the heights of tennis greatness, and King Richard dramatizes that story in an agreeable, if not particularly memorable, way. That's because this is one of those "inspirational" sports movies where you know exactly what you're going to get before you walk in. Naturally, even most folks who have no interest in tennis are at least aware of Venus and Serena's eventual success, but the draw here is mainly how their father, Richard (Will Smith) took a highly unconventional path to ensure that his daughters became the best tennis players in the world.

Richard wrote out a seventy page plan for their entire career before they were born, a fact that he reiterates multiple times throughout the film; and he sticks to that plan almost religiously, even against the advice of Venus and Serena's eventual coaches. In fact, Richard took such a hands-on approach that he garnered the attention of the national media, zigging where most advisors wanted him to zag, a stance that was controversial at the time but clearly paid dividends as almost every point of his plan eventually came to fruition. The film does little to interrogate the moral ambiguity of a father mapping out his daughters' entire lives before they're even born, but the Williams sisters seem fairly content with the outcome nevertheless.

It is perhaps due to the involvement of the family that the film remains mostly a surface level telling of this story, opting instead for feel-good underdog drama where monetary gain is seen as the ultimate arbiter of success. The performances are uniformly excellent, but Will Smith and Aunjanue Ellis are standouts as the Williams' father and mother. Their presence elevates the paint-by-numbers script, which is mostly content to plod along the surface without digging too deep. The same goes for the film as a whole, which is mostly pleasant and inoffensive but fairly basic in both construction and execution. The bottom line is that we've seen this movie before, often with more energy and flair. Smith and Ellis are worth the price of admission alone, but the film itself is unremarkable - a mildly entertaining tale of triumph over adversity that is content to fade into the background in ways that the tennis giants at its center never did.