Much has been made about the size and scope of Denis Villeneuve's Dune, an adaptation of Frank Herbert's sprawling 1965 science fiction  novel. And while it is certainly blockbuster filmmaking on a rare and impressive scale, the film feels surprisingly empty, the first act in a much larger story that gives us little reason to care about any of its characters or events. 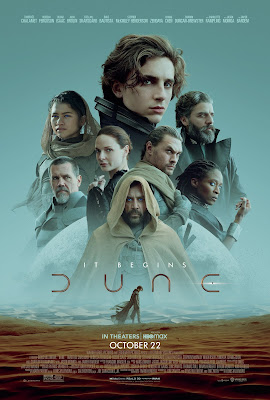 This is largely due to the fact that it is not, as originally advertised, a full adaptation of the book, and that the story will be split over two films. This puts Dune in the awkward position of essentially being the set-up for a payoff that won't happen for several years, and the film suffers because of it. For all its mythic world building, very little actually happens here, and the audience is left waiting for a three hour film to finally kick into high gear when it never really does. Dune ends just when it's actually getting interesting - a bold move a film that didn't have a greenlit sequel when it was released. It's as if we're watching the first episode of a television series rather than an epic feature film; it certainly leaves the audience wanting more, but that's mostly because it didn't give us much to latch onto in the first place.

Craft-wise, Dune is a marvel; filled with impressive visual effects, imaginative costumes, and an otherworldly score by Hans Zimmer. But the cinematography falls victim to that all too modern trap of being drastically underlit and murky. All this is in service of a plot that feels shockingly threadbare for a film that's about intergalactic political intrigue and civil war. This is mostly due to this being Act I of a larger narrative, but if The Lord of the Rings managed to deliver three films with three act structures and fully rounded stories I see no reason why Dune can't do the same. There's clearly an interesting world here, one that provides an all-too-timely critique of wealthy elites vying for control of natural resources in order to gain political power, but Dune takes three hours to get to really get started and then it ends.

Perhaps it will ultimately work better when seen in it's full context once Part II is released, but Dune as it stands is a curiously weightless affair, all sturm and no drang, a vaguely intriguing setup that is shockingly unsatisfying. One can't help but feel that the narratives been robbed of its context, serving as little more than an appetizer for another, better film.  It's a first act without a climax, a sweeping visual spectacle that ultimately lacks the substance to justify its grim self-seriousness. Here's hoping Part II makes it all worth it.