Jesse Moss' Mayor Pete is one of those blandly uncritical political documentaries that strives its hardest to paint a fairly milquetoast politician in thekindlst possible light. In this case the subject is Mayor Pete Buttigieg, 2020 candidate for the Democratic presidential nominee and first major openly gay man to seek the highest office in the land. Buttigieg, or Mayor Pete, as he is affectionately known by supporters, was an unlikely candidate who rose to national prominence through an underdog campaign that ultimately led to him winning the Iowa caucuses, before dropping out and endorsing Joe Biden after Biden's decisive win in South Carolina. 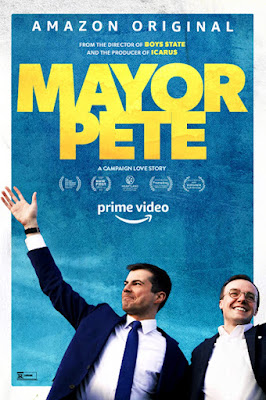 Buttigieg was not a nationally known figure prior to his run for president - his only claim to fame being the mayor of South Bend, Indiana. His underdog status is certainly appealing, especially as an LGBT person whose rise to prominence would have been nigh-on impossible even a decade ago. But the documentary has difficulty squaring his self-styled authenticity with the candidate himself, turning the film into a hopeless mess of contradictions that go largely unexamined. Just as Buttigieg himself was in search of a message, so too is the film.

Mayor Pete works very hard to paint Buttigieg as a down-to-earth man or the people, a charismatic, once in a lifetime candidate and heir to loftily hollow rhetoric of Barack Obama. But that's not the Buttigieg we see in the film, what we see is a candidate without a message desperately seeking one, a man trying to justify his own candidacy when he doesn't even know how to justify it himself. Buttigieg comes close to self-reflection in this regard, acknowledging that his authenticity is his appeal, but that the necessities of the campaign forced him to be more charismatic and forceful in an attempt to attract a broader audience. But Moss seems content to sweep that under the rug and move on as quickly as possible, crafting a narrative around Buttigieg that doesn't quite reflect who the man is.

The problem is that Buttigieg's identity remains frustratingly nebulous, a blandly congenial man seemingly born and bred in a neoliberal political factory prone to empty rhetorical flourishes and broadly palatable but ultimately meaningless platitudes designed to inspire but not engage. There's no depth or substance to any of it, just generic niceties about appealing to our higher selves and dreaming big that do little to address any real issues facing the nation. Mayor Pete never interrogates this, never asks any hard questions, and seemingly brushes off the fact that this "aw shucks" candidate often comes across as cold, aloof, and unlikable, the exact opposite of the image his campaign so desperately tries to protect.

In fact, the most genuine and likable figure to emerge from Mayor Pete is Buttigieg's adoring husband, Chasten, a man seemingly more in touch and more comfortable with his sexuality than Pete, who consistently seems to shy away from embracing what his candidacy might mean to young gay people who have never seen themselves truly represented in the political landscape at such a high level. It's heartbreaking watching Chasten attempt to explain this to an incredulous Pete, who comes to represent a kind of banal queer assimilationism that still seems to view his sexuality as a liability.

Ultimately, Mayor Pete is an empty film about an empty suit that might as well be a feature length campaign ad for his next run for office; it's a curiously bland hagiography that never fully interrogates the tension between the self-styled "authenticity" and his team's desperate attempts to mold him into a relatable, human candidate. It opts for shallow "inspiration" when the real question - how a political team convinced so many people that a candidate so seemingly manufactured on a Democrat assembly line is in any way relatable - lurks around every turn.  Even the filmmakers struggle to illicit much humanity, an almost constant issue that feels like dereliction of journalistic duty to such glaring questions. There's honestly no better example of the vacuousness of neoliberal politics, where empty platitudes and the barest examples of diversity are treated as a triumph final goal, while the candidate himself remains maddeningly opaque, spouting niceties without saying anything at all.