Kenneth Branagh pays tribute to the Belfast of his childhood in Belfast, a nostalgic tale of a young boy named Buddy (Jude Hill) growing up in Northern Ireland amid The Troubles, the decades-long conflict between Protestant and Catholic factions vying over the status of Northern Ireland as part of the United Kingdom. 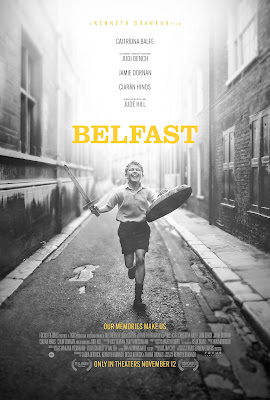 While The Troubles serve as a backdrop for what is essentially a coming-of-age tale, Branagh mostly ignores the politics of the conflict and focuses on the experiences of a Protestant family living in a mixed neighborhood. Mostly apolitical, this family attempts to weather the winds of change around them as young Buddy navigates his adolescence, feeling the pangs of first love, the loss of family members; while his father (Jamie Dornan) resists calls to join up in the conflict from  more militant neighbors. Buddy's mother (Caitriona Balfe) is determined to wait out the conflict at home - but his father wants to move to a new life in England, leaving everything they know behind for a chance at a better life.

For all the conflict swirling around this family, Belfast remains surprisingly inert for most of its runtime, opting instead for a slice-of-life approach that never quite jells. The film strives so hard for authenticity, but there's not an honest moment in it. Branagh is simply too theatrical a filmmaker to pull this off. It's as if he's is trying to make an Irish Roma without ever bothering to ground the film in his characters'  humanity. The vignette-like structure often undercuts any emotional weight it may develop by giving us little time to really get to know these characters, and it doesn't help that young Hill's one acting mode seems to be "precocious" and little else. It is that scattershot nature that never allows Belfast to attain the emotional weight it's so clearly striving for - and its big emotional beats in the final act feel woefully unearned as a result.

Branagh works best with an epic canvas - his Shakespeare adaptations have been some of the best ever put on screen; and he managed  to tap into something deeply personal in his chronicle of the bard's final days in All is True in 2019. But Belfast feels oddly out of his wheelhouse, a stilted attempt at naturalism, complete with black and white cinematography to lend itself an air of importance, and a stellar cast that is done few favors by Branagh's screenplay, which is frustratingly content to scratch the surface of the family's relationships, especially as it relates to the conflict unfolding around them. This was clearly a deeply personal project for Branagh; it's disappointing, then, that his own love for the subject seems to have prevented him from inviting the audience into its world. There's an interesting film to be made in this milieu, but Belfast isn't it - a curiously listless kitchen sink drama that feels like a pale imitation of much better, much more engaging, films.