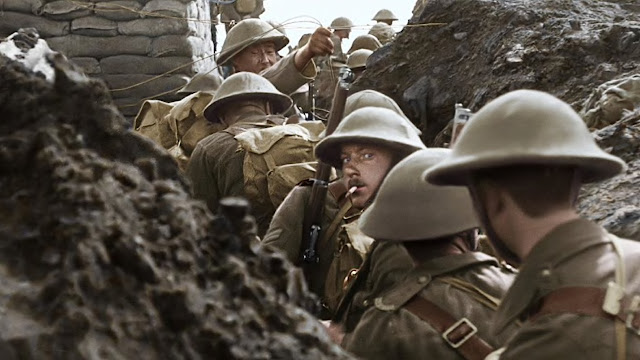 For many, silent films often seem like relics, ancient remnants of times gone by that hold little relevance to the world we live in today. As a student of cinema who loves the silent period, I've always found them fascinating, and yet there is something almost alien about them, a window into a bygone world that feel somehow removed what what is familiar to modern audiences. 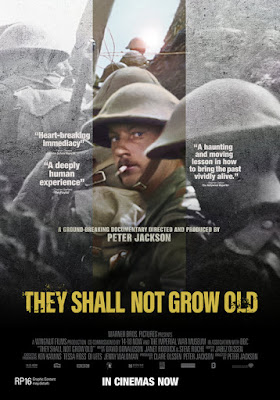 It is in that spirit that Peter Jackson approached his latest film, They Shall Not Grow Old. Commissioned by the Imperial War Museum, the film was made to commemorate the 100th anniversary of the end of World War I. Using original footage shot by war photographers on the front, Jackson set out to examine life in the infamous WWI trenches. Yet rather than simply show us the silent black and white footage we've all seen before, Jackson instead digitized, cleaned up, and colorized the footage so that it looks like it was shot yesterday.

Normally this kind of tampering would raise hackles of the cinema purist in me. Visions of badly colorized TV shows and movies that permeated the airwaves in the 80's and 90's come quickly to mind, completely destroying the artists' original intent, steamrolling their carefully crafted black and white images. But, as Jackson explains, this is something different. The black and white war footage isn't because of artistic choice, it was because of necessity. The war photographer did the best they could with what they had, but what Jackson has done is let us see the war as it really was.

Truth be told, the colorization isn't the most impressive part of They Shall Not Grow Old  It could have easily kept the black and white of the original footage and simply been restored to new glory by Jackson's technicians. The way they took old, almost unusable footage that was either under or overexposed and made it crystal clear for the first time in a century is jaw-dropping. The color still has that sort of sickly, faded quality that has always plagued colorized black and white footage, and yet one almost forgets they're watching something that's 100 years old. It's as if Jackson has reached through time and offered us a glimpse into the past. Never has the first world war felt so immediate. As an artistic statement it exists in a gray area, but as a historical artifact it is a meticulously researched and invaluable resource.

What Jackson has done to this footage is stunning. Not only will it help preserve the memory of the men who fought and died in WWI, but it's also an impressive feat of film preservation. While the black and white version would have perhaps been preferable, but They Shall Not Grow Old works miracles with the raw footage of the war that has gone unseen for decades. It's a unique cinematic experience that offers a rare glimpse into a nearly forgotten war that has never felt as tangible as it does here, and the results are often as chilling as they are haunting.