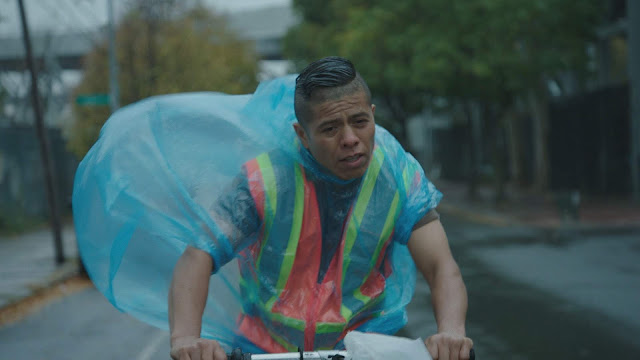 Jim McKay's En El Séptimo Día (On the Seventh Day) is a film so naturalistic that it almost feels like a documentary - a vérité-style examination of the lives of undocumented Mexican immigrants living in in Brooklyn that looks as though could have been shot on the fly as it occurred. 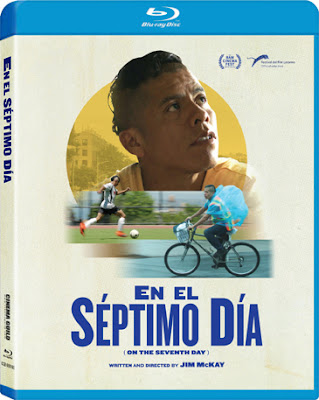 McKay never attempts to lay any kind of false drama or contrived plot on the proceedings, stringing it all together with the loosest of storylines centering around a bicycle deliveryman named José (Fernando Cardona) who moonlights as his local soccer team's captain on Sunday afternoons, his one day off.  One day his boss informs him that their restaurant will be catering a large party that Sunday and that he needs "all hands on deck." José's lone day off is cancelled. That also happens to be the day of the local championship, and as the team's best player, they're likely to lose without José there to lead them to victory.

It's a simple plot, centering around an issue that may not sound like that big a deal. It's just a soccer game, right? En El Séptimo Día is a deeply political film, but it isn't making any grand pronouncements here. Instead, McKay aims for something much more understated. José's boss had promised to help him get his green card, yet works him six days a week, and then takes his one day off, forcing him to work despite something very important to José happening that day. It's very much a form of exploitation. These micro-aggressions and abuses make up daily life for these immigrants - working from day to day in fear of their boss' whims without any protections to keep them from being exploited.

The film deservedly won the John Cassavetes Award at this past weekend's Independent Spirit Awards and is more than worth seeking out. It manages to take a complicated and contentious issue and distills it to its most essential human elements.  This is no angry political screed, it's a quietly revolutionary act of protest. The immigrants at the center of En El Séptimo Día aren't afforded the basic decency of a day off, the needs of their employers superseding the lives of the workers. What it lacks in dramatic power it makes up for in its deep sense of empathy. McKay's natural style recalls neorealist vision of DeSica and the scrappy, DIY aesthetic of Sean Baker. Like those two filmmakers, McKay arrives at a deep political truth about those who live on society's margins.  If your livelihood depends on your employer, and their reach extends into your personal life, what else can they control? Exploitation exists in myriad forms, and En El Séptimo Día explores them with a clear-eyed grace.