Blu-Ray Review | The Nutcracker and the Four Realms | 2018 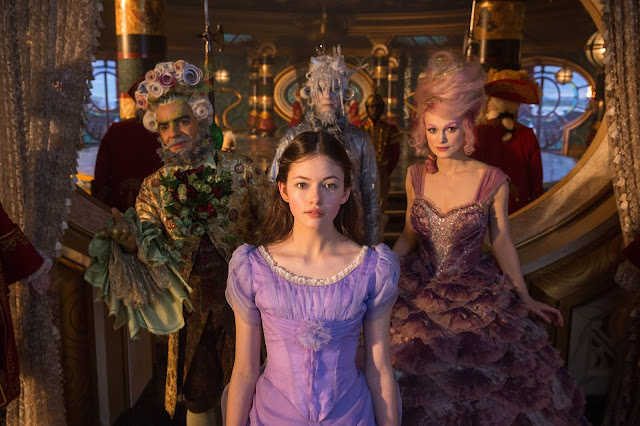 Disney's The Nutcracker and the Four Realms is a film so bizarrely conceived and rendered that it almost takes on a kind of unintentional avant-garde quality, completely disregarding any sense of narrative cohesion or recognizable form. This would almost be admirable if it weren't so aggressively dull - another overproduced CGI behemoth in Disney's modern live action catalogue that is gorgeously designed but devoid of any real heart. 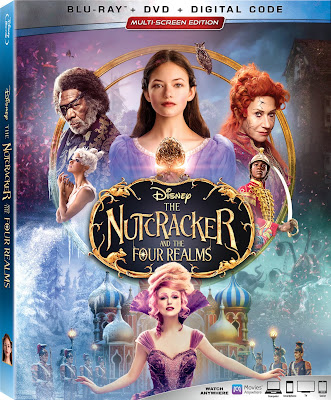 One must give credit to directors Lasse Hallström and Joe Johnston for going for broke here, because unlike the mostly wooden Beauty and the Beast live action remake, The Nutcracker and the Four Realms is genuinely trying to create something fantastic and new. The world it conjures resembles Narnia on hallucinogenic mushrooms, taking its protagonist through a closet and into a world dividing into four kingdoms; three living in harmony while the fourth stands in rebellion under the rule of the evil Mother Ginger (Helen Mirren).

Using Tchaikovsky's immortal ballet as a starting point, The Nutcracker and the Four Realms goes off the rails pretty quickly, delving into some overly complicated mythology in which our heroine, Clara (Mackenzie Foy), discovers a world created by her late mother as a child in her godfather's attic. Left by the wayside as her mother grew up, the world has fallen into neglect while awaiting her return. With the help of a stalwart nutcracker soldier (Jayden Fowora-Knight), Clara sets out to restore order to the realm.

At its core, The Nutcracker is a pretty standard issue fantasy epic in which a "chosen one" appears to save the fantasy world from some sort of catastrophe. It is anchored by two of the most lifeless lead performances to ever headline such a big budget film, with Mackenzie Foy and Jayden Fowora-Knight unable to conjure any charisma or chemistry that could possibly make us care about their characters. The MVP here is Keira Knightley, whose bubbly and unhinged take on the Sugarplum Fairy is the kind of "shoot for the moon" performance that is nearly worth the price of admission on its own. Knightley, with her squeaky voice and cotton candy hair, makes the film her own, completely giving herself over to the ridiculousness surrounding her and fully embodying its off-kilter weirdness. The always reliable composer, James Newton Howard, also comes through with a lovely score that makes great use of Tchaikovsky's iconic music.

The rest of the film, however, is a mess. It's certainly unlike any major blockbuster in recent memory, with its Rat King made up of teeming throngs of swarming rats, to poor Richard E. Grant's icicle hair, to the underused Helen Mirren's exiled villain who lives in a world of cracked dolls and creepy clowns, The Nutcracker and the Four Realms almost seems to be channeling Disney's darker days of the 1980s, when oddball films like Return to Oz were the order of the day. Unfortunately, it's a sumptuously designed visual feast that has no real personality or soul of its own. It looks gorgeous on Blu-Ray, and the ballet sequence is appropriately stunning. If only the rest of the film had put forth as much effort as Knightley at the team of designers.