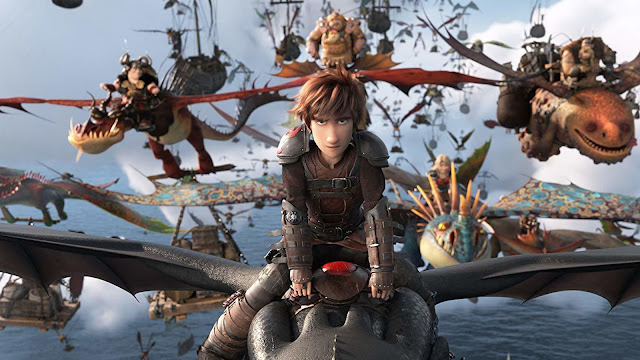 How to Train Your Dragon: The Hidden World is the culmination of a trilogy of films that began with 2010's How to Train Your Dragon and continued in 2014 with How to Train Your Dragon 2, a rare sequel that both depend and expanded upon the world established by the original. Collectively they make up some of the finest animated films of the last decade, not only providing great stories (based on the series of books by Cressida Cowell) but gorgeous animation and sweeping, Academy Award nominated music. Like most threequels, unfortunately, The Hidden World doesn't quite live up to the lofty promise of its predecessors, but that doesn't mean it’s completely without merit. 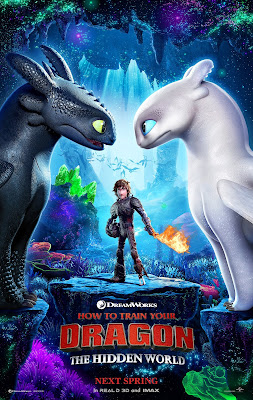 The film picks up a year after the last film, with Chief Hiccup (Jay Baruchel) and his trusty dragon, Toothless, leading the dragon riders of Berk to rescue dragons from captivity in order to create a utopia where humans and dragons co-exist side by side peacefully. But the arrival of an evil dragon hunter named Grimmel (F. Murray Abraham) soon forces the vikings to abandon Berk in search of the dragons' hidden home world, with a rare female night fury serving as bait for Toothless to lead them right into Grimmel's trap.

There's still plenty to admire here. The animation remains breathtaking, and John Powell's score rattles the theater walls with epic power. But the film just doesn't quite measure up to the previous entries in the series. It feels strangely rushed, as if the filmmakers are trying to hurry up and wrap things up The Hidden World lurches from one scene to another without taking the time to let the gravity of the previous scene settle in. It even combines and intercuts unrelated scenes that undercut the film's narrative drive. It's as if it doesn't want to grapple with the real thematic meat of the story.

These films have always succeeded most in mirroring Hiccup and Toothless' growth as leaders. The Hidden World finds them both grappling with their own abilities while also falling in love and discovering what it means to be a part of a family. Much of this is ultimately glossed over in the film's breakneck race to the finish line. The conclusion marks an emotionally tinged coda for the franchise that feels satisfying in context but doesn't quite seem to match the boldness that marked the previous films. Much like Dreamworks' Kung Fu Panda trilogy, the third part is a marked step down from a towering middle film, yet Kung Fu Panda 3 actually managed to one-up The Hidden World in its ability to guide the series to a natural conclusion. The How to Train Your Dragon series is stronger overall, and The Hidden World stands on its own just fine, but in the context of the high bar set by the other films in the franchise, it leaves something to be desired.

The adventures of Hiccup and Toothless have given us a decade of cinematic magic and wonder. Even if their final film isn't their strongest moment, they're still a charming pair, and The Hidden World manages to take their characters in interesting directions without sacrificing the core of who they are. It's a moderately engaging tale of adventure and friendship filled with dazzling visuals and a glorious score, but this rushed conclusion to such an incredible franchise can't help but feel just the slightest bit disappointing.

Email Post
Labels: Dreamworks How to Train Your Dragon