American audiences are probably most familiar with the China's wuxia genre through Ang Lee's Crouching Tiger, Hidden Dragon, which sparked something of a modern revival for the genre in the early 2000s, leading to such films as Hero, House of Flying Daggers, and Curse of the Golden Flower.

Wuxia, which translates to "martial heroes," is in no way a new genre, dating back over 2,000 years as both oral tradition and literature. It continued well into the 20th century as a popular cinematic medium in China, but the genre really came into its own in the 1960s under the direction of legendary filmmaker, King Hu, who pioneered the idea of action choreography. Hu not only refined the ancient tales through cinematic craft, he also changed the way action films were made - his action sequences were more disciplined, more tightly crafted than much of what had come before, grounding the violence in real-world consequences. Dragon Inn was his first film after moving from Hong Kong to Taiwan, and it breathed new life into the wuxia genre in ways that are still influencing filmmakers today, from Ang Lee and Zhang Yimou to Tsai Ming-Liang (who paid tribute to the film in his elegiac masterpiece, Goodbye, Dragon Inn) and Quentin Tarantino, who borrowed liberally from it in both Kill Bill - Vol. 1 and The Hateful Eight. 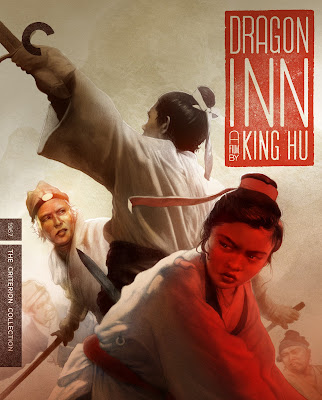 Dragon Inn's influence over The Hateful Eight is especially interesting, considering how much it shares in common with the western genre of its time. Yet, unlike the Japanese samurai films from which westerns were borrowing around the time for their lone gunslinger myths (and vice versa), Hu crafted a film for which there is no leading role, and the heroes only achieve their goals by working together. The film is set mostly in the eponymous inn, where disparate ruffians, soldiers, and mercenaries converge to intercept a family of prisoners being transported to their exile after the death of their father, a decorated general, at the hands of a ruthless eunuch who usurped power in the region.

Hu provides enough back story in the film's prologue to fill an entire other film, chronicling the rise of the eunuchs and the splintering of the army into warring factions. It's a lot of information to absorb, but the film quickly establishes that this is all secondary to the interpersonal conflict that unfolds within the confines of the inn. While the eunuch, Tsao (Pai Ying), sends his soldiers to murder the children of General Yao to quell any potential uprising, several groups of lone freedom fighters also appear at the inn in order to protect them. The brilliance of Dragon Inn is that none of them know who each other is, and friend and foe alike are pitted against each other from the moment they walk in the door.

Before they engage in psychical violence, however, they must first engage in a battle of wits, subtly testing each other to see on what side their allegiance lies. Hu builds most of the film's suspense out of these encounters, as the characters attempt to root each other out through wordplay, charm, intimidation, and even poisoning, showing the audience his hand but never allowing the characters to know what is really going on. It's a very Hitchcockian technique, and by the time the film erupts into violence in its third act, Hu has so thoroughly wound up the tension that the entire films seems to be balancing on a knife's edge. Hu makes the transition by bursting out of the drab confines of the inn into the the colorful landscapes that surround it, the film's color scheme suddenly reflecting its own kinetic energy.

As the film wears on, Dragon Inn becomes more impressionistic, almost abstract, in the way that it not only depicts the final showdown between the heroes and the villainous eunuch, but in how it expresses the inner turmoil of the characters. It's a sight to behold, tightly choreographed and beautifully shot, establishing Hu as a true master of the cinematic language. If the film is unfamiliar to western audiences, surely that is because it has been widely unavailable on home video until the release of the new Criterion Blu-Ray that, while relatively light on special features, features a truly stunning 4K digital restoration. It is a bold step into the 21st century for a wuxia classic whose influence continues to be keenly felt in modern cinema.