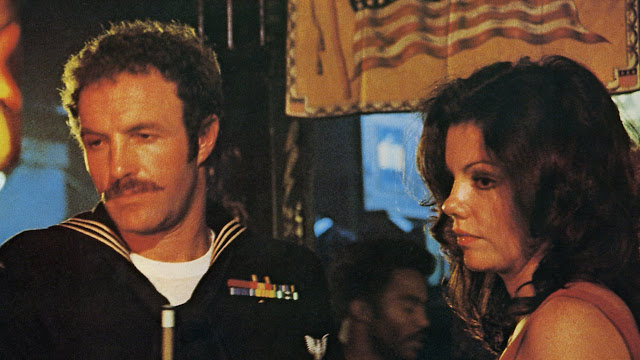 Contrary to what its title (and plot synopsis) might lead one to believe, Mark Rydell's Cinderella Liberty is not a Cinderella story.  The central character may resemble the "whore with a heart of gold" cliché, you'll find no redemption rags-to-riches stories here.

The title in fact refers to a specific type of military leave, granted to John Baggs Jr. (James Caan), a Navy seaman on shore leave suffering from a minor health issue and a giant paperwork mishap that causes him to miss his next deployment. Only allowed out of the hospital until midnight, he meets a beautiful barroom hustler named Maggie (Marsha Mason) for what he thinks will be a one-night stand. But when he finds that she has a young son at home with a head full of rotten teeth and a severe case of anger management issues, he takes a deeper interest in Maggie's life. He decides to take the boy under his wing, taking responsibility for his and Maggie's wellbeing, in hopes to one rescue her from her life of prostitution, and boy from his beer-swilling, tobacco-chewing lack of parental guidance. 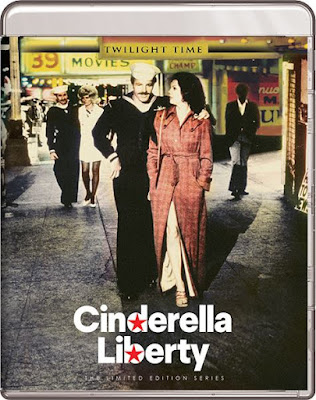 Mason went on to earn an Academy Award nomination for raw performance as Maggie (John Williams' folksy score was likewise nominated for an Oscar that year), but the real heart and soul of the picture is Baggs' relationship with young Doug (Kirk Calloway). Much is made of Doug's mixed race in the film, as if that somehow made Maggie's sexual escapades more egregious. Thankfully, Rydell avoids the implicit racism of the screenplay's attitude toward Doug by completely un-senimentalizing the character. Doug will indeed face a harder life in the 70s due to his mixed race and social standing, and Rydell treats the character with empathy rather than judgement, even when he seems to do the opposite with Maggie's character.

Maggie is not, as stated earlier, a whore with a heart of gold, and despite John's best efforts to change her, she may be too far gone in a lifestyle of self-absorption born of poverty and desperation. The proceedings are given a kind of gritty, grounded look by the great cinematographer Vilmos Zsigmond (McCabe & Mrs. Miller), who brings the streets of Seattle to dreary, seedy life. There's nothing glamorized or romanticized about Cinderella Liberty. It is awash in shades of gray and brown and set amidst a series of dirty bars, adult book stores, and porn theaters that make up its characters' daily reality. Adapted from a novel by Darryl Ponicsan (who also gave us another film about Naval leave the same year - Hal Ashby's masterpiece, The Last Detail), Cinderella Liberty feels grounded and lived in, but its characters often feel inconsistent. Traits are picked up then dropped, decisions are made seemingly at random, and grudges are quickly reversed. If this is to reflect the often messy nature of human interaction, it only works to a certain degree, instead coming across as narrative shorthand rather than believable characterization.

It's this scattershot attention to plotting that really holds the film back. Cinderella Liberty is filled with lovely moments that never quite add up a one satisfying whole. And its overly sentimental ending undoes the harsh realities that it dwelled in previously. Its three central performances, especially that of a beautifully understated James Caan, hold the film together nicely, but it never really comes together in a way that takes it to the next level.