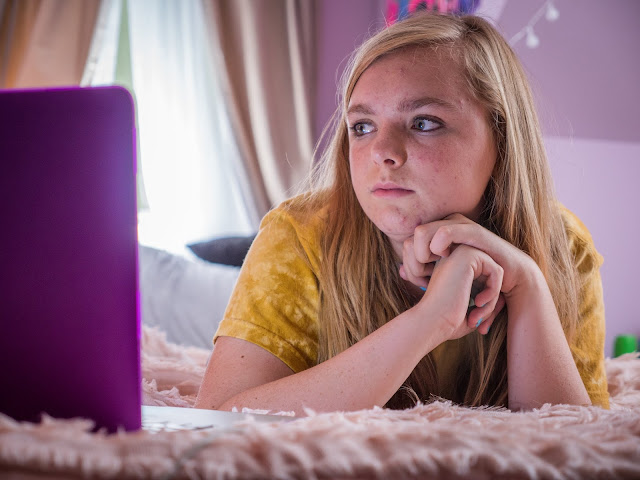 There is perhaps no more awkward time in a person's life than middle school. Whether you were a popular kid, an outcast, a nerd, a jock, or any manner of middle school stereotypes, awkwardness is just part of the package of the early teen years. As such, Bo Burnham's Eighth Grade will likely hit painfully close to home for many.

Thankfully for those of my generation, having attended middle school in the late 90s, smart phones weren't around to record our awkwardness and preserve it for posterity. That isn't a luxury anymore, and Eighth Grade immerses us into the life of 13-year-old Kayla (Elsie Fisher), an eighth grader on the cusp of high school, whose buoyant YouTube channel showcases a confident and exuberant personality that is merely a mask for the shy and insecure girl she is in reality. 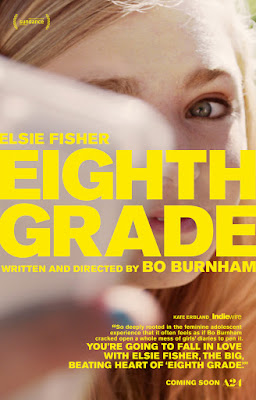 She watches makeup tutorials to present a picture-perfect version of herself online, in reality she is frumpy and gawky, all slumped shoulders and uncovered acne. She is every bit the typical teenager, constantly embarrassed by her loving but chronically uncool dad (Josh Hamilton), while suffering from raging hormones and a changing body that is growing far too fast for her mind to keep up. And even though she longs to be popular, she can't quite get passed her own awkwardness to approach the cool girls in school, even after being invited to a pool party at the house of the eighth grade's resident "mean girl," who just got voted "best eyes" in the school, but you'd never know it since she never looks up from her phone.

It is here where Kayla first encounters Aiden (Luke Prael), school hunk and male winner of the "Best Eyes" class superlative award, and Gabe (Jake Ryan), her male equal in awkwardness. While Kayla spends time trying to get Aiden's attention (who, rumor has it, only dates girls who send nude pics), hang out with older kids, and convince the world that she's "cool," she soon begins to realize that the world doesn't end in eighth grade,

Writer/director Burnham expertly handles thorny issues of sexuality, self-worth, and staying true to yourself even when you don't yet know who that is. What makes Eighth Grade so extraordinary is just how authentic it feels. It doesn't feel like a movie made by adults trying to understand "kids these days," nor does it feel like an after school special trying to mine soapy melodrama from issues kids face every day. Thanks to Burnham's compassionate and deeply human screenplay, along with the marvelously lived in performance of young Elsie Fisher, Eighth Grade is a fly-on-the-wall look at life as lived by actual 13-year-olds that is at once hilarious, cringe-inducing, and achingly empathetic.

Burnham so perfectly nails the agonizing beauty of growing up that the film is often difficult to watch, but it's never less than a rewarding experience. It is an impressive and assured directorial debut that not only makes us thankful that middle school is firmly in the rearview mirror, but finds a powerful truth in the human experience of crafting one's identity in a digital world - even when social media pressures us into a new kind of "keeping up with the joneses" at younger and younger ages, kindness is still the coolest character trait of all.