Franchise Friday is a new feature here at From the Front Row, that aims to take a look at an entire franchise, through all its ups and downs, and examines what makes it special. This week the focus is on Steven Spielberg's classic blockbuster, Jaws (1975), and the much-maligned series it spawned.


The original Jaws is a perfect movie in nearly every way. Spielberg's narrative control, his visual storytelling, his sense of pacing - are all just incredible. He establishes character quickly without sacrificing integrity, giving us characters we're invested in and care about. Spielberg instinctively knows that what we don't see if often what scares us most, and his build-up to the eventual shark reveal is masterfully constructed. It's easy to see why Jaws pretty much invented the summer blockbuster as we know it today, smashing box office records and making an entire generation afraid to go in the ocean, much as Alfred Hitchcock's Psycho had done for showers 15 years prior.

Take, for instance, the scene on the beach, when young Alex Kittner (Jeffrey Voorhees) is killed by the shark. It's such a brilliant set-up - Chief Brody (Roy Scheider) suspects that a shark is stalking the waters off Amity Island, but driven by fear of closing the beach on the busiest week of the year, the mayor (Murray Hamilton) refuses to let him close the beaches. Brody is the only one on the beach who suspects anything is wrong. As the people go about their business on the beach, Spielberg slowly brings the camera in on Brody, using passers-by as excuses to cut closer and closer in on his face. It's so subtle, and so ingenious, and done completely without music to enhance the tension (something John Williams' immortal score does brilliantly elsewhere), before finally exploding into chaos when the shark attacks "the Kittner boy." Yet in the best Spielberg fashion, it's controlled chaos, each frame and each cut designed for maximum effect. It was an audacious project for the young filmmaker, but one that established him as the go-to guy for popcorn entertainment. It endures today as one of his finest works, a marvel of control, sustained tension, and narrative economy. There's not a wasted or gratuitous shot in the entire film. It remains classical Hollywood storytelling at its best. 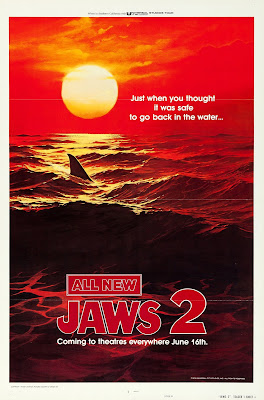 After the runaway success of Jaws, a sequel was all but inevitable, despite the fact that almost everyone involved in the original thought a sequel was a terrible idea. That film, after all, basically invented the idea of the summer blockbuster, and Universal knew it had a winning formula. While Steven Spielberg declined to be involved, Roy Scheider, however, was contractually obligated to appear, and so it that a franchise was born. Luckily, composer John Williams, whose immortal two-note theme earned him a well-deserved Oscar, also agreed to return.

The resulting film is better than it has any right to be. Director Jeannot Szwarc doesn't have Spielberg's storytelling elegance or sense of pacing, but by pretty much any measure Jaws 2 (1978) is a solid adventure yarn, in which the town of Amity is once again terrorized by a massive shark. This time, however, it isn't targeting swimmers at the beach, it's set its sights on a group of teens practicing for a sailboat race, a group that just so happens to include Chief Brody's two sons. The fact that the mayor and town council don't believe Brody's insistence that a shark is once again feeding off the waters of Amity Beach may seem like a retread of familiar territory, but it Szwarc and Scheider make it work by making Brody seem almost unhinged with PTSD in his obsessive pursuit of the shark. He comes off as a loon who sees sharks in every shadow on the water.

It's a smart twist for a film that otherwise doesn't stray too far from its predecessor's example. The shark is more brazen this time around, leaping out of the water, taking down helicopters, and sporting a distinctive burned face from an encounter with an exploding boat. It hints at the silliness that would later overtake the series, but Jaws 2 is one of those rare sequels to a classic film that actually holds its own, making Brody's quest more personal by placing his children in harm's way. 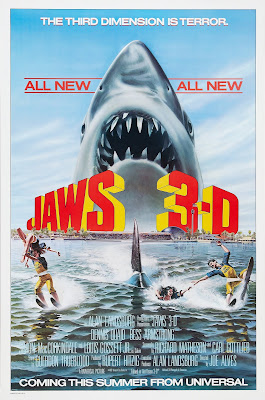 Giant sharks overtake Orlando's Sea World in the ill-advised third installment of the Jaws saga, which finds Chief Brody's sons, Mike (Dennis Quaid) and Sean (John Putch), working at the park when a small Great White accidentally swims into the lagoon, followed quickly by his much larger mother.

Marred by laughable 3-D effects, Jaws 3 (1983)is a difficult film to take seriously, especially considering that it really shouldn't be hard to not be in the water where a shark could eat you at Sea World. Director Joe Alves (who served as production designer on both Jaws and Jaws 2) tries to rectify that by trapping park guests in underwater tunnels under the lagoon, but nothing much ever really comes of that. Instead we have some silly romantic travails, shady corporate shenanigans (courtesy of Louis Gossett, Jr.'s unscrupulous park manager and Simon MacCorkindale as a seedy television producer), and some of the series' most ludicrous shark kills. One takes place with the camera filming from inside the shark, as a diver gets crushed to death inside the shark's mouth while trying to avoid its teeth.

The reliance on gimmicky 3-D effects clearly meant to pop out of the screen is distracting, but pretty typical of 3-D films of the era (see also 1982's Friday the 13th Part 3). The problem is, even if you take away the cheesy effects, you're still left with a film that just doesn't make much sense. The shark is easily the worst-looking one of the series, and most under-water shots of the sharks are just shots of actual sharks swimming around looking confused, intercut with people swimming in panic to create the illusion of a chase. The highlight, surprisingly enough, is the score by Alan Parker, which does a fantastic job of adapting John Williams' iconic theme, while forging his own path with a triumphant new fanfare that gives the film an optimistic sweep that it really doesn't deserve.

"This time, it's personal!" Jaws: The Revenge (1987) certainly turned its tagline into a punchline with its ludicrous premise about a shark with a personal vendetta against the Brody family, but despite its poor reputation, it's not nearly as bad as it could be. It's certainly better than the execrable Jaws 3 (with better effects to boot), but where the fourth and final installment in the Jaws franchise falters is in its story.

I love the idea of Ellen Brody as Captain Ahab, consumed by hatred of sharks after the death of her son and three films worth of shark attacks involving her family. And Joseph Sargent hints at that somewhat in the film's finale, but the film never really goes that route, taking the scenario much too literally as another massive great white targets the Brody family, then follows them from New York to the Bahamas to try and finish them off. It's a deeply dumb idea, which is a  shame because the movie is actually not poorly made. In fact, the Christmas setting on Amity island makes it feel like a solidly nostalgic return to the setting of the original Jaws (there's even a cameo by Lee Fierro's Mrs. Kittner and Fritzi Jane Courtney's Mrs. Taft). But Brody's psychic connection to the shark and the shark's seemingly targeted vendetta is beyond silly, and therefore impossible to take seriously.

The film is wholly unnecessary, and adds nothing to the series (besides the surprising presence of Michael Caine), and instead pulls the shark into weirdly supernatural, slasher-movie territory that feels especially reductive given just how powerful and grounded the original Jaws was. It's a shame, because it truly feels like there could be something here. Lorraine Gary's grieving mother chasing down the shark that killed her son is a killer premise (what if there wasn't actually a massive shark this time?), but it is done in by a truly ridiculous execution that completely negates the mindless, indiscriminate killing that made the original shark so scary in the first place.