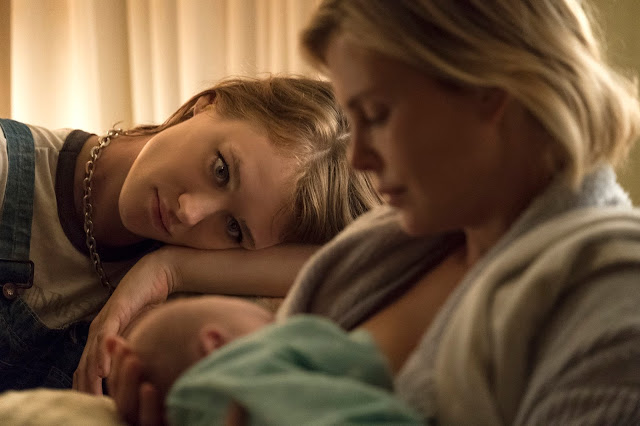 A struggling mom gets an unexpected helping hand in Jason Reitman's wise and altogether wonderful Tully. Written by Diablo Cody (Juno), Tully stars Charlize Theron as Marlo, a mother of three who is overwhelmed by her maternal responsibilities, barely keeping up with feeding and taking care of her kids' special needs, not to mention their issues at school, while her husband, Drew (Ron Livingston), can barely be bothered to do their schoolwork with them at night before disappearing upstairs to play video games. Marlo is at her wits' end, when her brother, a man she had written off as pretentiously bourgeois, hires a night nanny for her birthday. 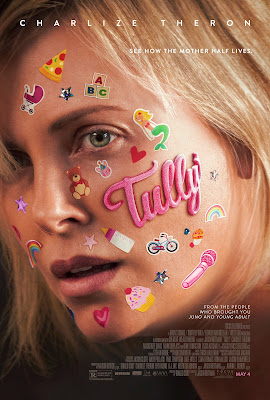 Enter Tully (Mackenzie Davis), a young woman who can seemingly do everything. Like a modern day Mary Poppins, Tully swoops in to take care of not only Marlo's newest baby, but Marlo herself, allowing her to finally get some much needed rest. But that's not all Tully does, she also manages to reawaken Marlo's lust for life, her love for her family, and perhaps most importantly, her love for herself.

Using a kind of magical realism, Reitman takes a hilarious and often moving peek behind the curtain of motherhood, chronicling the every day struggle to keep all the plates spinning and all the balls in the air. Tully finds a distinctive beauty in the mundaneness of parenthood, when all the parenting advice, trendy techniques, and conventional wisdom fail and life throws constant, unexpected curveballs, that is where the true beauty of having a family often lies.

Yet Tully isn't so much about a woman learning to appreciate her family, it's about a woman learning to appreciate herself, and discovering that she had the strength to overcome life's challenges hidden within herself all along. It's also about the importance of self-care - Marlo sacrifices so much for her family that she often forgets to take care of herself, and the entire family unit suffers as a result. Much has been said about the third act twist, but rather than finding it cheap as some have, I found it quietly magical, a perfect cap for the film's thematic heart.

Theron is a marvel, as always, turning in a weary, un-self conscious performance as a woman at the end of her rope rediscovering the strength within herself. Her path of discovery anchors the film as a celebration of motherhood in all its messy glory. It's the kind of film that sneaks up on you, a drama disguised as a comedy that packs a powerful emotional wallop, and you may find yourself wanting to call your own mother afterward to thank her (or perhaps apologize). It's easily Reitman's best work since Thank You for Smoking, and features Cody's most mature and insightful writing yet. It treats the very idea of motherhood with a rare sense of dignity and humanity that never slips into schmaltz or patronization - this is just lovely, honest filmmaking; a special work whose memory will linger long after the credits have rolled.