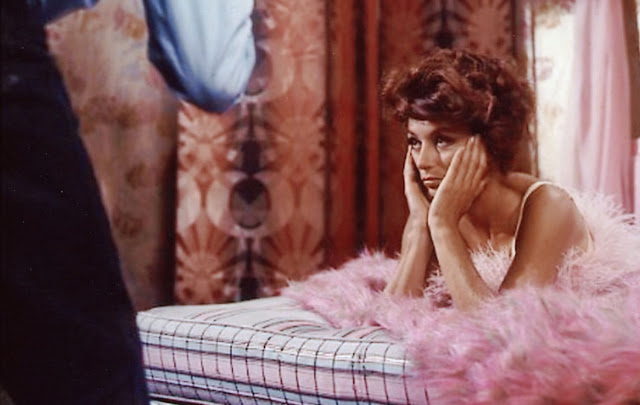 Jacques Demy only made one English language film - 1969's Model Shop. Inspired by a trip to Los Angeles with his wife, Agnès Varda, Demy set out to make a film about the city, capturing its rhythms and textures, through the many drives he made through its streets.

It turned out to be a creatively rich vacation for both filmmakers, inspiring Varda to make Black Panthers, Uncle Yanco, and Lions Love (...and Lies). While Varda was more fascinated by the people of Los Angeles, Demy fell in love with the city itself, and created a kind of travelogue about a struggling architect trying to discover where he fits into the world. Like Demy himself, our sanguine hero, George (Gary Lockwood), is something of a stranger in a strange land, an artist without an outlet, a man who wants to create works of art, but remains unemployed because he doesn't want to waste his talents designing gas stations. 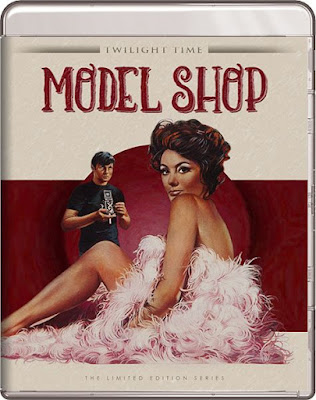 He finds his inspiration in a seedy photography studio where men are invited to take pictures of scantily clad models - $12 for 15 minutes, camera and film included. It is there where George meets Lola (Anouk Aimée, reprising her role from Demy's 1961 film, Lola), a model trying to make ends meet so she can return to France to see her son. George becomes increasingly infatuated with her, leaving behind his frustrated girlfriend to pay visits to Lola's studio. When George receives his draft notice summoning him to Vietnam, he decides to make one last ditch effort to win Lola's affections, even if both of them are headed to opposite ends of the world.

Model Shop is a film of maybes and what ifs, as much about "the one that got away" as it is about finding a connection, no matter how brief, in a world of uncertainty. Demy eschews his typically vibrant color schemes here, employing them only within the confines of the photography studio (a fantasy world that represents a kind of escape), instead creating a kind of drab realism to accompany the drudgery of George's daily life. And yet despite the fact that George lives next to an oil refinery, Demy clearly loves the world he's plunging us into. There's a sense of Vietnam-era ennui at work here, a kind of innocence lost in a teeming, once vibrant city. George is a creative stifled by a world that simply wants him to conform and punch the clock (self-reliance, boot-straps, and all that), and the call of the Army makes his mortality come into sharp focus.

There's an almost neo-realist vibe to Model Shop, something that is very different from Demy's typical filmmaking vocabulary. And yet is always vibrantly alive, capturing the indelible rhythm and hues of the streets of LA with as much loving detail as anything in The Umbrellas of Cherbourg. Here, Demy shows that he doesn't need cotton-candy colors to create something memorable, here all he needs are the streets themselves, and the appealingly inscrutable face of Gary Lockwood, on which to paint something beautiful. It's a haunting and often deeply reflective meditation on the American dream that is as timely now as ever.