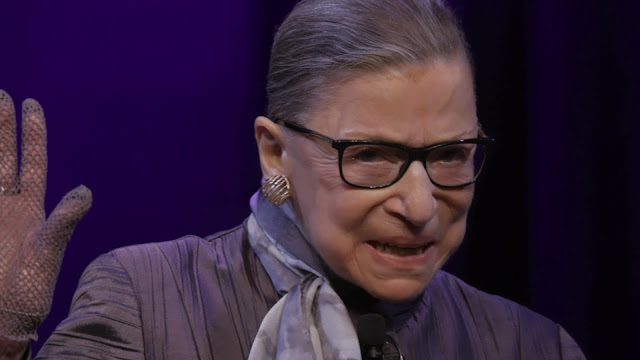 Betsy West and Julie Cohen's new documentary, RBG, begins with a litany of conservative commentators hurling insults at Supreme Court Justice and liberal icon, Ruth Bader Ginsburg, calling her "a witch," "a monster," "an evildoer," "wicked," "anti-American," "an absolute disgrace to the supreme court," and even "a zombie." 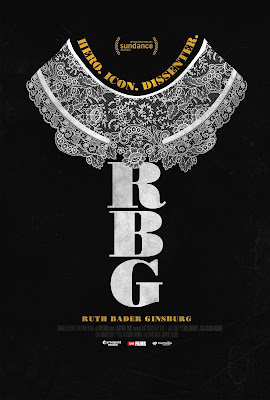 Afterward, the film never really returns to this conservative backlash (except for one brief clip of President Trump whining about Ginsburg criticizing him), instead spending the next hour-and-a-half making them look foolish simply by demonstrating Ginsburg's character. Using her 1993 Supreme Court confirmation hearing as a framing device, RBG charts Ginsburg's career from her childhood, to Harvard Law School, to her tenure as a law professor, all the way to the United States Supreme Court and her current status as a political rock star often referred to as the "Notorious R.B.G."

Ginsburg is a soft-spoken, unassuming figure, yet deeply committed to the cause of equality under the law. Her diminutive figure belies a tenacity and strength that has made her a fierce advocate for women and minorities well into her 80s. While her "notorious" reputation has mostly been a product of her status as a vocal dissenter on a conservative leaning Supreme Court, RBG examines her life and career as a lawyer during a time when women were looked down upon for pursuing a career in the male-dominated field of law. She argued in front of the Supreme Court six times (winning five cases) in the name of women's rights, and married a fellow law student who was never intimated by her greater reputation.

The film is a loving and at times glowing tribute to a great woman, but never tips into hagiography. Through her own words and the words of those who worked with (and at times against) her, RBG paints an indelible portrait of a woman dedicated to public service who worked to befriend those across the aisle so as to be a more persuasive voice for those with whom she disagreed. Despite their fundamental disagreement about the very nature of the Constitution, Ginsburg became close friends with conservative firebrand, Antonin Scalia, a rare showing of non-partisan camaraderie in an increasingly polarized world.

RBG will doubtlessly be a crowd-pleaser for the justice's legions of fans, but it will also be an illuminating piece of history for those who only know her as the "great dissenter" liberal hero she's become in the last decade. It's a big-hearted and wide ranging biography of a truly special woman, at last placing her in her proper historical context as a woman who helped break down barriers, quietly shaping the world we live in today with little fanfare. West and Cohen have crafted a inspiring and often gripping look at the history of modern women's rights through the lens of a humble and reserved woman whose unlikely rise to the highest court in the land mirrors her own ongoing quest for a world that's more equitable and more just than the one she came into.


RBG | Directed by Betsy West and Julie Cohen | Not Rated | Opens Friday, May 4, in select cities.