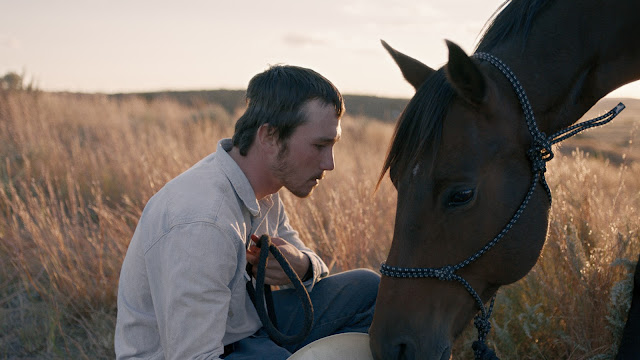 I've been putting off writing about Chloé Zhao's The Rider. Not because I didn't have anything to say about it, but because the more I reflected on it, the more I realized I perhaps had too much to say. By the time the credits rolled, I had so many thoughts and feelings swimming around in my head, that the task of filtering through them all and organizing them into some coherent form seemed like a Sisyphean task; no sooner than one thought congealed, then another idea appeared like a film critic game of whack-a-mole. 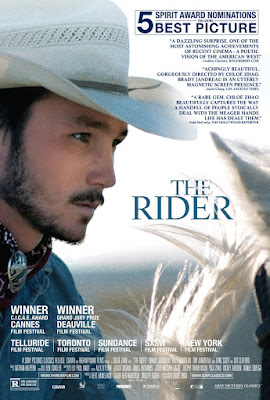 Such is the wonder and beauty of Zhao's sophomore feature (after her 2015 debut, Songs My Brother Taught Me), a rough-hewn elegy for the American west and the archetypal masculine mystique of the cowboy. At a time when toxic masculinity and its devastating effects dominate the news, Zhao, who was born in China before immigrating to the United States to study political science at Mount Holyoke College, has crafted something deeply special a film that offers more insight into wounded masculinity than just about anything else in recent memory. Forget "Hillbilly Elegy," The Rider is the profound exploration of rural ennui we need.

The plot itself isn't particularly remarkable - a star rodeo rider (Brady Jandreau) takes a fall and finds himself unable to get back into the ring. With his livelihood shattered, so too is his identity, and he finds himself taking up odd jobs and working minimum wage jobs in grocery stores to make ends meet until he heals. But when he learns that he may never be able to ride again, he soon faces an existential crisis that will either lead him down a path of despair, or toward a whole new life.

We've seen films like this before, a star athlete gets struck down in their prime and must learn to reinvent themselves. But rarely do these films have such a quiet authenticity as The Rider. There's a heartfelt honesty at the core of Zhao's film, and it starts with the cast, each playing a fictionalized version of themselves. Brady, his father Wayne, and his sister Lilly, are the heart and soul of the film, and it is their careworn realness that makes the film so unique. Zhao's first film, Songs My Brother Taught Me, was made after living amongst the residents of the Pine Ridge Indian Reservation. Zhao followed a similar process for The Rider, resulting in a film that seems to live and breathe its subject.

Zhao deftly explores the wounds to Brady's masculinity after his injury, and how that feeling of helplessness ties into his own lack of direction and inability to cope with losing the core of his identity. This isn't one of those breathless, post-Trump "plight of the forgotten man" screeds, in Zhao's capable hands this is about what that very mentality has made us lose. Through Jandreau's achingly authentic performance and some truly breathtaking cinematography by Joshua James Richards (God's Own Country), The Rider paints a heartbreaking portrait of a generation of young men searching for their identity, set against the backdrop of the fading American West. It's a delicate and tremulous thing, at once confident and gentle, lyrically composed yet as stoic as the American masculine ideal it so carefully deconstructs. This is a major film by a major filmmaker, a stirring and compelling search for the idea of the American man at a time when toxic masculinity has brought us so much ill through its anger and fragility. Zhao seeks to find another path forward through the myths of our past, pining not for an America that once was, but for an America that still could be.