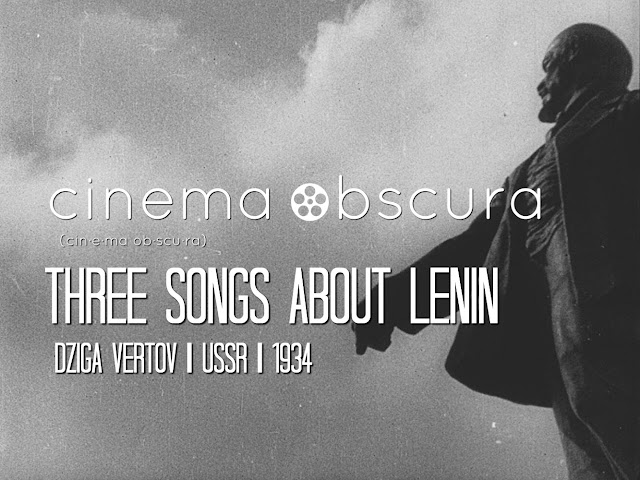 Including a film by a filmmaker as universally revered as Dziga Vertov in my Cinema Obscura series might raise a few eyebrows. While he is hardly a household name, Vertov is nevertheless regarded as one of the great filmmakers by cineastes and film historians, who consider his 1929 film, Man with a Movie Camera, to be one of the greatest films ever made. On the other hand, Vertov is hardly a household name, and while most film historians tend to focus on Man with a Movie Camera, his later work is often just as fascinating from a historical point of view, if for somewhat different reasons.

By the time Vertov made Three Songs About Lenin in 1934, Stalin's regime was already cracking down on what they saw as "revolutionary" filmmaking. The Bolshevik revolution was over, and the Communist Soviet government was well established at that point. Stalin demanded that films be of a simple language, easily understood by the masses, and so Vertov's Kino-Eye theory was suddenly out of step with the very government it once helped prop up. 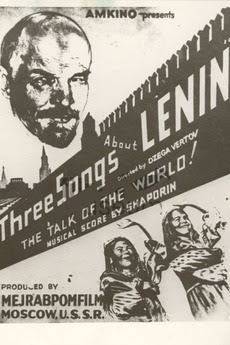 The idea of Kino-Eye was that film should eschew the romantic narratives of bourgeois filmmaking and embrace a sense of realism that was beneficial to the public. While Vertov's editing style was decidedly avant-garde, he flouted the idea of narrative cinema in favor of filming life as it happened, rather than try to stage it himself. These ideas would later be embraced by Jean-Luc Godard and Jean-Pierre Gorin when they formed the short-lived Dziga Vertov Group in 1968 in an attempt to radicalize modern filmmaking for Marxist goals. But as Three Songs About Lenin shows, even Vertov was forced to abandon his own ideals as Stalin moved away from the founding principles of the very revolution he helped implement.

Vertov made Three Songs About Lenin to commemorate the 10th anniversary of Vladimir Lenin's death, and peering through a modern lens, it almost resembles something one could imagine Fox News might make about Donald Trump. It is a shamelessly effusive hagiography of the Communist hero that makes him out to be more god than man, ironic given the atheistic bedrock of Soviet thought. It was also a deeply personal work for Vertov, who clearly venerated Lenin, but it's almost sad watching how the filmmaker's style was neutered by the government in order to make it more straightforward. In fact, its very core is a betrayal of Vertov's Kino-Eye principles. While much of the film is comprised of re-edited newsreel footage, much of it was staged for the sake of the film, a departure from the organic reality Vertov sought in his filmmaking.

The film is comprised of three segments, each featuring a folk song about Lenin from some far-flung corner of the USSR. It's interesting, now, watching a communist film decry Islam as a prison for women, and realize just how much the Soviet government shares with modern conservatives in the age of Trump. The first song is a celebration of a Muslim woman breaking free of her veil, its Islamaphobic undertones painting Muslims as barbaric and backwards, and the Soviets as benevolent liberators, a bit of agitprop self-aggrandizement that ultimately proved to be false. 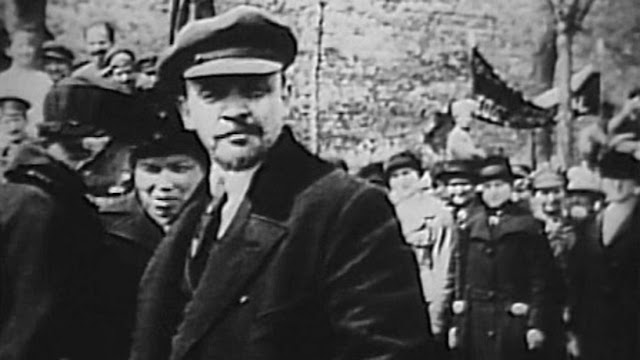 And yet, even with its state-sanctioned roadblocks, there's something about Three Songs About Lenin that is hard to shake. Vertov was clearly a master of editing. Whereas his contemporary, Sergei Eisenstein, used montage as a storytelling tool, Vertov used it to illicit emotion. Much of the film was culled from newsreels, and Vertov managed to turn them into pure visual poetry. No one did propaganda films like the Soviets, and while government restrictions eventually tamped down the avant-garde elements that initially distinguished them, Vertov took the cards he was dealt and still managed to turn them into cinema magic. He conducts Three Songs like a symphony in three parts, eventually building to an ecstatic crescendo that admittedly veers into some pretty painful deification that seems even more cringe-worthy in retrospect, as the breathless pronouncements of the invincibility and permanence of Lenin's achievements now seem somewhat quaint.

Despite that fact, Three Songs About Lenin is often overlooked in favor of Vertov's more famous works. Man with a Movie Camera remains the ultimate representation of his Kino-Eye aesthetic, a pure union of captured image, found footage, and montage. But it is worth exploring the rest of his filmography. In his quest to find truth through cinema, Vertov often found the exact opposite, and is therefore a fascinating study in propaganda and where cinematic observation becomes manipulation through use of editing, cinematography, and music choices. Like the regime that gave birth to it, the film has been all but lost to history, forgotten and hacked to pieces in the years since its release. The most complete version, reconstructed from both the sound and silent versions, is available on Blu-Ray and DVD from Flicker Alley.
Email Post
Labels: cinema obscura flicker alley