Review | "We Need to Talk About Kevin" 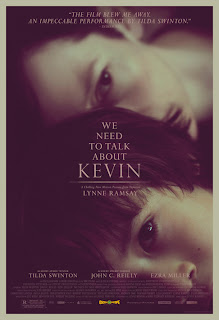 Something is very, very wrong with Kevin.

That much is clear right from the start of Lynne Ramsay's We Need to Talk About Kevin. Kevin is sullen, spiteful, even hateful, with no apparent reason or provocation. The problem is that no one seems to see it except for his long suffering mother, Eva (a spectacular Tilda Swinton), for whom he seems to harbor an intense, special kind of hatred.

It's a new, more realistic twist on the "evil kid" movie like The Bad Seed and The Omen, except the kid in question doesn't have supernatural powers and he isn't the Antichrist, he's just purely and simply evil.

To everyone else he's just a spirited child who loves his father and only has the best of intentions. After Eva spends a day wallpapering her room with old maps, Kevin declares them stupid and proceeds to splatter the walls with paint. His father claims he just wanted to help his mother make her room "special." But she knows better.

All of Kevin's transgressions may seem small when taken on their own, but the big picture is disturbingly bleak. Either Eva is crazy, or her son is. Either way, something in this family is gravely wrong. The film jumps back and forth through time, told mostly through the flashbacks of a clearly traumatized and haunted Eva in the aftermath of an unknown tragedy. The details of that tragedy are readily available in plot synopses around the internet, but this is one of those cases where I feel that going in blind is the best choice. Ramsay builds the film up to the big reveal, never giving us a glimpse at the real nature of the tragedy until the very end. Eva has clearly become a pariah in her community. She works in a depressing, dead end job, spending her spare time scrubbing off buckets of red paint that have been splattered on her house and car. What could Kevin have happened that resulted in such harsh treatment? Is it something she did, or something her son did?

Ramsay skirts the topic through most of the film, presenting us instead with the damaged psyche of a woman on the edge of a breakdown. It is reminiscent in some ways of Sean Durkin's recent art house hit, Martha Marcy May Marlene in its depiction of a woman's descent into paranoia psychological hell, except unlike MMMM, We Need to Talk About Kevin is a much messier, much less carefully controlled film. While there is something to be said, of course, for a film essentially evoking a mental breakdown being messy, it just doesn't work as well, often feeling unfocused and repetitive rather than streamlined and fully effective, despite a strong central turn by Swinton.

The biggest issue with the film, however, is its characterization of Kevin. Played by Ezra Miller as a teenager and Rocky Duer as a child, Kevin is a sneering, almost cartoonish character. He is the very picture of evil but is completely lacking in depth, especially for a film that claims to be a psychological thriller. There is no real psychology at work here at all. Ramsay tends to paint in broad strokes, and Kevin is more of a caricature than a character, replacing subtlety and nuance with overstatement and hammy cliches. Ramsay makes no attempt to explain Kevin's actions or how he became the way he is. He's just evil, and that's the end of it. The film pays lip service to exploring Eva's own sense of guilt and culpability, but where is her culpability? She is a nearly inactive parent, a passive recipient of Kevin's malevolence, whose one act of physical retaliation results in Kevin's sole moment of tenderness towards his mother. Without exploring the reasons behind Kevin's pathological nature, We Need to Talk About Kevin is severely neutered.

It's reasonably entertaining, certainly, in a pulpy beach read kind of way. It's nearly impossible to take your eyes off of Swinton in any film, and she's on fire here. But she's lost in a film that never quite figures out what it wants to be. It's not deep enough to be a character study, and lacks the strong script it needs to be a solid psychological thriller. It's penchant for using paint by numbers characterizations and easy screenwriting shortcuts dampen its overall impact (even if its finale is suitably jarring). For the most part, it is a film of surface pleasures that isn't nearly as deep or profound as it thinks it is, and it's that pretension of importance that is its most unforgivable sin. Had it embraced its trashy, Lifetime movie of the week nature it might have been more understandable and therefore passable as throwaway entertainment. But its lofty aims make its shortcomings that much more stark. What we have here is a film that is so much less than it actually is, with grand pretensions of psychological depth that just never manifests itself. If only it had actually embraced the movie it was rather than the movie it wanted to be, or vice versa, this would be a different story. As it stands, it's a movie almost as troubled as its central character - addled, confused, and ultimately lost.