Review | "My Week with Marilyn" 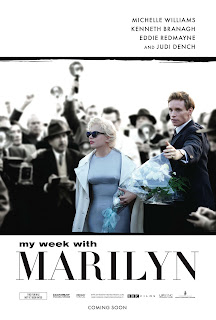 It would be easy to dismiss Simon Curtis' My Week with Marilyn as a simple piece of Hollywood nostalgia, a peek behind the curtain at a legendary figure who wasn't at all what the public perceived her to be. It's not a new concept. Showbiz tell-alls have been a Hollywood staple for decades. But there's something decidedly innocent about My Week with Marilyn that makes it enourmously appealing. This isn't a salacious piece of tabloid journalism, it's a light and lovely look at one of Hollywood's great icons from a different point of view.

Based on the memoirs "The Prince, the Showgirl, and Me" and "My Week with Marilyn" by Colin Clark (Eddie Redmayne), the film recounts one week in 23 year old Colin's life as he was working as the third assistant director to Sir Laurence Olivier (Kenneth Branagh) on the film, The Prince and the Showgirl during the summer of 1956. Its star was a 30 year old Marilyn Monroe (Michelle Williams), who desperately wants to be seen as a serious actress rather than just a sex symbol. 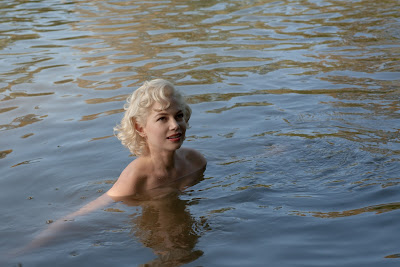 She is constantly accompanied by a gaggle of handlers who spend most of their time shielding her from reality, but for Olivier the biggest pain is her acting coach, Paula Strasberg (Zoë Wanamaker). In her attempts to fashion herself into a serious actress, Monroe became devoted "the Method" and the teachings of Stanislavski (which Olivier rejected), with Strasberg insisted everyone else work around Marilyn's strange new work ethic. Often egregiously late to the set and under the influence of a multitude of medications, Marilyn was airy, aloof, and easily rattled, a fragile creature in need of a knight in shining armor. That's where Colin comes in. A starstruck young fan pursuing a lifelong dream of a life in the pictures, Colin is instantly drawn to Marilyn, despite his feelings for a young costumer (Emma Watson).

In Colin, Marilyn discovers a sure and steady confidant, someone outside her coterie of yes men and a respite from her new husband, playwright Arthur Miller, with whom she has a strained relationship. Colin becomes her constant companion, much to the chagrin of her handlers and the delight of Olivier, who comes to view Colin as his inside man. But as Colin and Marilyn grow closer, Colin risks losing his heart. Is Marilyn truly in love with him? Or is he just another toy in her game of life? 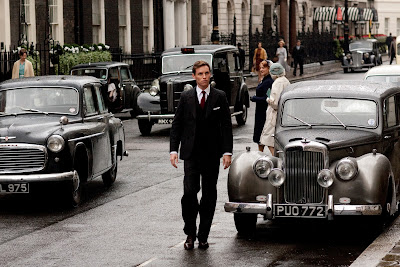 It would be easy to question the veracity of Colin's story, and how this 23 year old 3rd assistant director carried on a week long love affair with one of the most beautiful women of all time. But the story, and the film, lack the sensationalistic qualities one would expect from such a story. The Marilyn of the story isn't a smoldering temptress, she's almost like a lost little girl in way over her head. Neither is Colin portrayed as a heroic savior. Instead, Marilyn is just  lonely woman looking for a connection, and Colin is a starstruck boy too naive to realize he's out of his depth. It's an honest, emotionally truthful connection that never feels cloying or manufactured, despite an occasionally clunky script by Adrian Hodges.

The real highlight here, however, are the performances, especially Williams' Marilyn and Branagh's Olivier. Williams not only channels the iconic persona of Marilyn Monroe that we all recognize, but seems more than anything to embody Norma Jean, the sad, overwhelmed girl beneath the legendary Marilyn veneer. This woman we see is not Marilyn Monroe. Marilyn Monroe is a figment of someone else's imagination that Norma spent a lifetime trying to live up to, which eventually led to the overdose that caused her death. Branagh as Olivier steals scenes left and right, while Judi Dench shows up occasionally to do that Judi Dench thing she does so well. And while it's hardly revelatory, the film itself is something both lovely and consistently engaging. It's an instantly entrancing romance that will be a delight for both fans of Marilyn and lovers of old Hollywood, for its behind the scenes look at the filmmaking process of the time is wholly entertaining. It is as if Norma Jean somehow lives on through Williams, and while in the end she remains something of an enigma, the glimpse of the human behind the legend is enough to make us appreciate who she was even more.