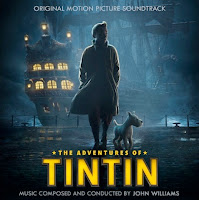 THE ADVENTURES OF TINTIN (composed by John Williams)

Coming on the heels of his other 2011 score for War Horse, John Williams' The Adventures of Tintin has some mighty big shoes to fill. As someone who prefer's Williams' meatier dramatic works, I was surprised to discover that Tintin is actually the stronger of the two scores. War Horse is great when viewed as a standalone composition, but it stands out in the film so much that it's almost distracting. It's as overbearing as the film's hamfisted emotions. Tintin, on the otherhand, while perhaps lacking the strong central identity of Williams' classic adventure scores, is still great fun, and demonstrates the maestro's mastery of complex and smartly crafted action music.

Williams kicks things off with the jazzy opening number, "The Adventures of Tintin," which accompanies the opening credits sequence and sets the tone for the zippy adventure to follow. From there on out, much like the film, the score zips along at a breakneck pace. Williams wastes no time introducing his main themes in the tracks "Snowy's Theme," a playful tune for Tintin's faithful dog, and "The Secret of the Scrolls," a dark and mysterious theme for the Unicorn and its cargo that recalls "Irina's Theme" from  Indiana Jones and the Kingdom of the Crystal Skull and the iconic Ark theme from Raiders of the Lost Ark (and receives a wonderfully grand performance in "Sir Francis and the Unicorn"). "Introducing the Thompsons and Snowy's Chase" introduces a jaunty motif for the hapless detectives played by Simon Pegg and Nick Frost, but isn't until the 8th track, "Captain Haddock Takes the Oars," that Williams unleashes one of the score's primary identities for the drunken sea dog, Captain Haddock. At first a soused and wobbly theme for tuba that staggers and meanders like a drunken sailor, the theme matures and "sobers up" over the course of the score until a full heroic statement near the end.

Williams can weave themes into a tapestry like no other, and in The Adventures of Tintin, the themes and motifs come flying fast and furious. While none have the strong, instantly recognizable theme one comes to expect from a Williams score, the amount of intelligent thematic writing here is staggering. It's only weakness is that it lacks a defining personality of its own, as it often relies heavily on tried and true "Williams-isms." Still, especially for a man pushing 80, no one has more creative energy pulsing through their music like Williams does, and he really outdoes himself here. It's a pleasure to have the maestro back, and Tintin will prove to be a feast for fans and newcomers alike. 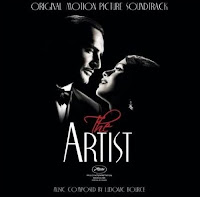 THE ARTIST (composed by Ludovic Bource)

It can arguably be said that music played no greater role in any other film this year than in Michel Hazanvicius' highly acclaimed silent film The Artist, and as such is the most likely front runner to win Best Original Score at the Academy Awards early next year. And I won't say it doesn't deserve it. A meticulous recreation of Golden Age scores and music from early silent films, Bource's score, much like the film it accompanies, is a nearly endless delight.

As what is often the sole sound in the film, the music becomes its sole voice and aural personality, and therefore plays a hugely pivotal role in the film. The score starts off in grand fashion with "The Artist Overture," which calls to mind the grand style of Old Hollywood. That's really my only complaint with The Artist is that its influences are all over the timeline, not necessarily sticking to the music of the era the film is meant to evoke. However the fact that the film takes place at the end of the silent era just as sound was beginning to take over, using some of that big sound make sense somewhat.

My favorite theme of the score makes its first appearance in "George Valentin." It's a jaunty, comedic piece for Jean Dujardin's silent film star that is reminiscent of the music that Charlie Chaplin wrote for his own films. That's where The Artist really gets the most points from me, in its evocation of Chaplin. While I almost wish Bource had stuck primarily with a more authentic sound of silent film accompaniment (like what we hear in the track "1927: A Russian Affair," that is meant as a source cue of sorts of a live orchestra accompanying a silent film), the score's jazzy personality is almost irresistible, even when it dips into darker territory in later cues like "My Suicide (Dedicated to 03.29.1967)." It also takes on a more romantic flavor in beautiful piano driven cues like "Comme Une Rosée De Larmes" (one of the score's highlights). There are a lot of source cues as well, which may betray the film's silent conceit, but add period flavor, if not particularly any value to the score itself.

Bource may be mostly unfamiliar to American filmgoers, but suffice it to say that such a bold and stunningly crafted score will most certainly put him on the map, and the almost inevitable Academy Award win won't hurt it either (barring a win by Cliff Martinez's Drive or Trent Reznor and Atticus Ross' The Girl with the Dragon Tattoo, each excellent works in their own right). While the film itself may be slight and overpraised, the score deserves every award it can win. It's charm goes beyond its nostalgic trappings and becomes something much more impressive. It's far and away one of the scores of the year.