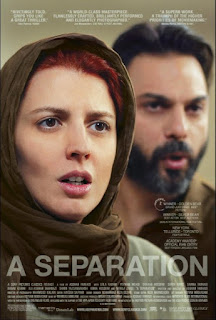 In an age of heightened tension in the Middle East, with constant threats of new sanctions and saber-rattling to be heard in regards to Iran, a film like Asghar Farhadi's A Separation is especially refreshing. It's easy, in times of conflict, to imagine other cultures as alien and different, to paint the citizens whose governments we disagree with with the same brush as their leaders.

In A Separation, a film born out of Iran, we see no oppressive mullahs, the visage of President Mahmoud Ahmadenijad is nowhere to be found, you'll find no religious or political propaganda or grandstanding of any kind. Everything about the film seems to casually flout the current political narrative simply by not being political at all. A Separation is a family drama about a normal family who finds themselves in extraordinary circumstances. What makes the film so remarkable is that it is so very universal. Audiences may balk at the idea of watching something so seemingly exotic as an Iranian film, but they would be missing out on something wholly identifiable and breathtakingly honest. These people could be from anywhere in any country, and that is one of the film's strongest assets.

The couple at the center of A Separation is as normal a couple as they can be. Nader (Peyman Moadi) and Simin (Leila Hatami) bear little resemblance to the egregious Muslim stereoptype of overbearing patriarchal households beholden to Sharia law we often see depicted in American film. Nader is a typical working father just trying to keep his family together, while Simin wants to move out of the country to pursue a better life with her daughter, Termeh (Sarina Farhadi). Nader refuses to leave behind his elderly father, an Alzheimer's patient who is still living at home. The only option left to them is a divorce, which Nader is willing to grant despite his love for his wife. Faced with the breakup of his family, Nader must do the best he can to keep going and providing for his daughter. With Simin gone, he hires a housekeeper, Hodjat (Shahab Hosseini) to help take care of his quickly deteriorating father.

Hodjat is taken aback by the task she is saddled with, not expecting the amount of work that would be involved and the true condition of Nader's father. A deeply religious woman, she is embarrassed by his inability to use the bathroom on his own and frets whether or not being placed in a situation where she may see his genitals is a sin. Then one day, Nader returns to find his father tied to the bed, and Hodjat nowhere to be found. When she returns, he confronts her about leaving him alone, accuses her of theft, and forcibly ejects her from his home, and in the ensuing altercation in which she falls out of his door she accuses him of causing her miscarriage and therefore the murder of her unborn son. Nader soon finds himself entangled in a legal battle with seemingly no end in sight, as she accuses him of murder and he accuses her of theft and elder abuse. As the mire threatens to engulf them all, justice seems to drift farther and farther out of reach.

It is that idea of justice that permeates every frame of A Separation. As each character's motives slowly become clearer, the idea of justice becomes even more muddled. Farhadi examines ideas of justice in a world colored in shades of gray, set against a backdrop of family turmoil and a legal system for whom people are just numbers. All the while Nader's family becomes even more broken under the strain, and his daughter is eventually posed with an impossible choice. Farhadi closes his film one of the most haunting notes of uncertainty of the year, offering no answers but hinting at the familial divide to come. The screenplay, written by Farhadi himself, is a marvel of restrained emotion and rapidly changing undercurrents, while the performances rival Kenneth Lonergan's Margaret as the strongest ensemble acting of the year. Shabab Hosseini is especially heartbreaking as Hodjat, a woman caught in a web of lies who keeps digging herself deeper and deeper into an inescapable mess.

There are no heroes or villain's in Farhadi's disarmingly naturalistic world; just people trying to do the best they can for the people they love whose motives occasionally run afoul of each other. It's like watching a train wreck, frustratingly inevitable and yet unblinkingly gripping. "Lies may lead to truth" reads the incisively cryptic tagline, presciently summing up the film's lasting impact. In a world where white lies spin out of control and threaten to destroy lives, Farhadi discovers simple yet deeply human truths - that the divides that so often separate us can seem so impossibly wide are never quite as far as we imagine.