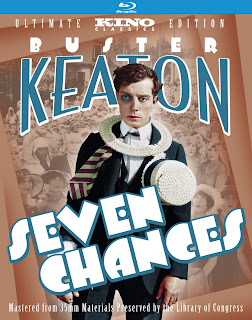 On top of having a banner year for theatrical releases (having distributed Le Quattro Volte, Poetry, City of Life and Death and more), Kino Lorber has also had a banner year for blu-ray and DVD releases, steadily releasing Buster Keaton's considerable catalogue in impressive new hi-def editions.

Having already released his most well known work, as well a tremendous collection of his short films, Kino Classics has moved on to some of his lesser known films like Go West and Battling Butler. While some of these are more obscure for a reason, there are also some hidden gems amongst Keaton's films that now have the opportunity for a second chance.

One such diamond in the rough is Seven Chances. While still a minor film when compared with Keaton's towering, iconic work in films such as The General and Steamboat Bill, Jr., Seven Chances showcases Keaton at his most effortlessly charming, and is also one of his few sole directing credits. 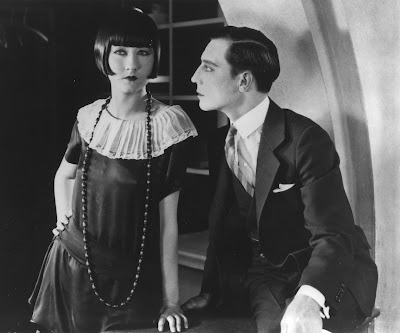 While it may lack the consistent slapstick that often characterize Keaton's stronger works, Seven Chances remains an endlessly clever and endearing work. Based on the play by Rai Cooper Megrue, Seven Chances stars Keaton as James Shannon, a financial broker who is quickly running out of money. His luck changes, however, when his grandfather passes away and leaves him $7 million on the condition that he get married by a certain date. The problem is the date happens to be the same day Shannon receives the will. So he sets out to find himself a bride by 7:00, and hilarity, of course, ensues. None of the candidates he finds seem to be suitable, so he runs an ad in the paper explaining his situation - leading to one of the largest gatherings of brides in one room the cinema has ever seen. The climax of Seven Chances is one of  Keaton's best, a whirlwind of action and visual gags as Shannon finds himself chased through the streets by a horde of angry would-be brides.

Of all the Keaton films Kino has released on blu-ray, Seven Chances is perhaps their most pristine and stunning transfer.  The image is often flawless, which is especially impressive considering the film is 86 years old. The film also features an early two-color Technicolor sequence which has been lovingly restored by film historian Eric Grayson, and is utterly gorgeous on blu-ray, making Seven Chances one of Kino's finest restorations yet. 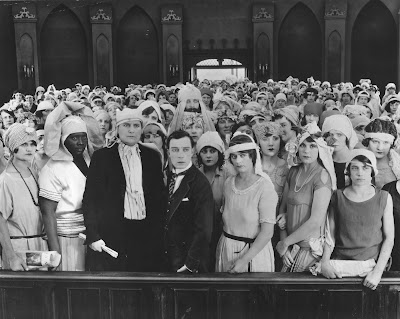 The set also includes two short films - How a French Nobleman Got a Wife Through the New York Personal Columns, a 1904 Edison short directed by Edwin S. Porter, who is perhaps best known for 1903's The Great Train Robbery, about a man who places a personal ad in the paper and gets chased down by a flock of brides, and A Brideless Groom, a 1947 Three Stooges short co-written by Keaton collaborator Clyde Bruckman, who co-directed many of Keaton's best films. A Brideless Groom finds Shemp coming into a large inheritance provided he gets married by that evening and is clearly inspired by Seven Chances, demonstrating just how influential Keaton was on future comedians., and it also serves to demonstrate just how inferior the Stooges were to the great slapstick artists like Keaton, Chaplin, and Laurel & Hardy who came before them.

It's hard not to fall in love with Keaton's films, and following Kino's blu-ray re-releases of his work over the past year has been a real pleasure. While he certainly made better films than Seven Chances, it's still a showcase of the man's boundless genius. Keaton had a knack for finding comedy in the most mundane situations, turning them into large scale epics of misfortune continue to amuse and delight audiences today. With renewed interest in silent films from contemporary works like Hugo (which directly references Keaton) and The Artist, which are currently in theaters, films like Seven Chances are a perfect example of the best of silent comedy. Modern comedy owes a great debt of gratitude to Keaton, and this is why.