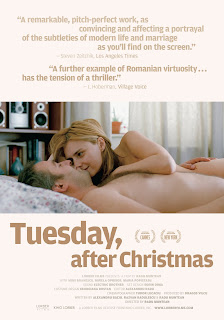 Longtime readers know of my affinity for Romanian cinema. I have long been a champion of the Romanian New Wave, but even I will admit that the movement has been coasting somewhat since 2008. There have been some good films to come out of the country since then - California Dreamin', If I Want to Whistle, I Whistle, and Police, Adjective just to name a few. But none have quite had the power of those first few films like The Death of Mr. Lazarescu and 4 Months, 3 Weeks, and 2 Days that initially heralded Romania as a new leader in world cinema.
However, one shouldn't be so quick as to declare the movement dead just yet. Because just as the movement seemed to be fading from the forefront of critical consciousness, along comes Radu Muntean's Tuesday, After Christmas, seemingly asserting that Romanian cinema is here to stay.
While it may be hard to define the Romanian New Wave as a movement (if you could call it that at all), as there is no collaboration between filmmakers or a certain unified cinematic goal like there was with the French New Wave or the Dogme 95 movement, it's hard to deny that the recent spat of films to come from the country have all shared a very similar, grim aesthetic.

Like so many of its predecessors, Tuesday, After Christmas is composed long, static shots with few edits and no music, a hallmark of the movement that has remained mostly consistent. Its opening shot lasts nearly ten minutes without so much as a tilt or a pan, almost as if it is a window through which the audience is invited to look. The camera doesn't judge the characters or push the audience, it simply presents the story as an impartial, if unblinking, observer.
For its central character, Paul (Mimi Brănescu), escape from his transgressions is impossible. A middle aged banker, Paul has fallen in love with his young daughter's dentist, Raluca (Maria Popistaș), and has embarked upon a steamy love affair, totally unbeknownst to his wife, Adriana (Mirela Oprișor). They have only been together for six months, but Paul can no longer deny the obvious - he no longer loves his wife, and must leave her for Raluca if he is to ever be happy. But doing so would destroy his family and hurt his daughter, leaving him with a painful decision that will change them all forever.

Unlike many infedelity dramas, Tuesday, After Christmas keeps it simple and to the point. When the adulterous revelation finally comes, there is a decided lack of histrionics and melodrama. Instead, Muntean chooses to focus on the intimate details - how the affair affects its most innocent victims, namely, Paul's wife and daughter. We never actually see Paul reveal the dissolution of his marriage to his daughter, but we know its coming. That's part of this film's brilliance - its emotions, its nuances, are all felt rather than spelled out. Rather than teary monologues we get glances, gestures, parents on Christmas trying to maintain normalcy in the face of great heartbreak. It is the little things that make up this austere narrative, creating an emotional tension almost akin to a thriller.
While it may not have the same kind of gravity as Mr. Lazarescu or 4 Months, Tuesday, After Christmas is nonetheless a film that is hard to ignore. Like the best of the Romanian New Wave, it says so much while saying so little, turning a very simple and straightfoward story into something of great emotional power. It's a slow burner, but the final payoff is extraordinary, leaving the characters before grappling with their inner turmoils before embarking on a very tough road. The film ends at such a point as if to say "Enough. This is too private, it's time to leave." And it leaves a lasting impression. Adultery has rarely felt this painful, or this honest. Tuesday, After Christmas is a raw and candid examination of the end of a family, leaving questions hanging in the air that linger in the mind like cobwebs in the corner of a dusty room. Romanian cinema is far from dead, and Muntean's film is here to show us that it never went anywhere in the first place.
GRADE - ★★★½ (out of four)
TUESDAY, AFTER CHRISTMAS | Directed by Radu Muntean | Stars Mimi Brănescu, Mirela Oprișor, Maria Popistaș | Not rated | In Romanian w/English subtitles | Now playing at the Film Forum in NYC.
Email Post