a/perture Cineclub Presents "How I Ended This Summer" May 9 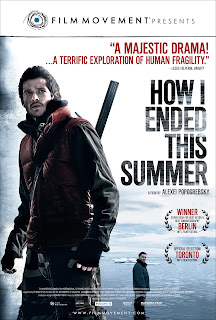 Winston-Salem's a/perture Cinema, in conjunction with the River Run Film Festival will present this month's Cineclub selection, Alexei Popogrebsky's How I Ended This Summer on Monday, May 9, at 8 PM.

Set on a remote island in the Arctic Ocean, How I Ended This Summer is a tense psychological thriller about a student named Pavel who is assigned to write a paper called "How I Ended This Summer," and decides to spend it at a lonely weather station taking readings for the meteorological service. The station is manned only by one attendant, a gruff and hard edged mane named Sergei, who prefers to be left alone.

Sergei is an all business, no nonsense sort who doesn't trust Pavel with the more important tasks at the station, so Pavel is often left alone with the menial tasks, trying his best to stay out of Sergei's way. One day, Sergei allows Pavel to take the readings for himself while he takes a short fishing trip. While he in on the radio, he receives tragic news about Sergei's family. 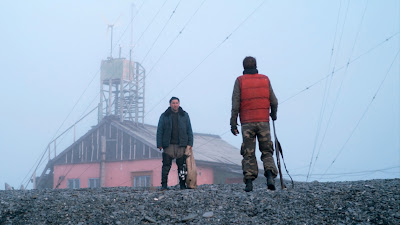 Pavel (Grigoriy Dobrygin) and Sergei (Sergei Puskepalis) in Alexei Popogrebsky's How I Ended This Summer.
Courtesy of Film Movement.
Frightened by the news, Pavel is unable to bring himself to tell Sergei about the tragedy, crafting one lie after another until he is caught in a web of his own deception where he is no longer able to hide the truth. When the terrible reality finally comes to light, Pavel has to face not only his own deception, but Sergei's rage. Alone in the Russian wilderness, surrounded by radioactivity, and isolated from the rest of the world, Pavel will face a fight survival that will change him forever, ensuring that the end to this summer will be the most unforgettable he has ever had.

Popogrebsky creates an atmosphere of palpable isolation and loneliness, which drives the film's almost unbearable tension. He expertly ratchets up the suspense with an overarching sense of dread, anchored by two terrific lead performances that make the perhaps far-fetched scenario seem hauntingly real. The motivations for both characters make complete sense in the moment, although their believability has been a point of division for critics who have been sharply divided over the film. Popogrebsky makes it work in context, however, and turns it into a fascinating and compelling story of the human capacity for deception and the affects of isolation. It's a top notch thriller.

HOW I ENDED THIS SUMMER | Directed by Alexei Popogrebsky | Stars Grigoriy Dobrygin, Sergei Puskepalis | Not rated | In Russian w/English subtitles.