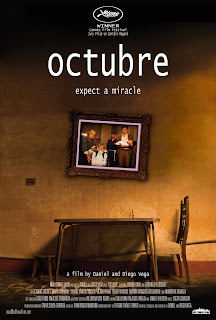 Daniel and Diego Vega's debut feature film, Octubre, is awash in a quiet sort of dignity. It is an unassuming film, lacking in sentimentality or grand statements, but its also a very hopeful film, that makes its point without any sort of unnecessary pontification.

Understatement is the hallmark of Octubre, a drolly funny and deeply affecting look at a small time loan shark named Clemente (Bruno Odar), whose life is stuck in a rut. His clients are faceless pawns to him, and he never looks beyond their potential to turn a profit to see the human beings in need. He spends his spare time visiting a run down brother where he always requests the same tired old prostitute. The villagers around him don't even call him by his real name, he is known simply as "the pawnbroker's son." Clemente is a shell of a man, and he doesn't even know it.

That is until one day he returns home to find a bag containing a newborn baby on his bed, a product of one of his many liaisons with a prostitute. 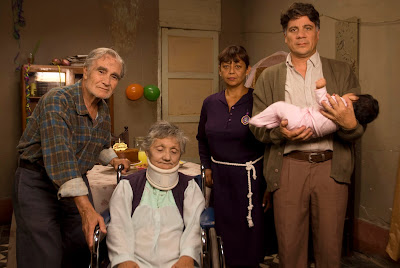 (L-R) Carlos Gasols as Don Fico, Norma Francisca Villarreal as Rosa, Gabriela Velásquez as Sofia and Bruno Odar as Clemente in OCTUBRE. Courtesy of New Yorker Films.
Suddenly, Clemente is saddled with an unexpected responsibility that he never asked for. While he desperately tries to search for the mother, he hires Sofia (Gabriela Velásquez), one of his clients, to take care of the baby. Sofia is a devout Catholic, and a believer in the Lord of Miracles, an annual October celebration. In Peru, October is known as the "purple month," a time for miracles, and Sofia is determined to pray for a miracle. As Clemente searches for the mother of the baby while trying to lead a normal life, something altogether unexpected happens. There will be a miracle, and Clemente will discover something deep within himself that he never knew existed.

The Vega brothers deftly avoid schmaltz, and craft something that is at once humorous and deeply human. Octubre is a slow burner, the kind of film whose emotional hooks don't show themselves until they're already in you. It eschews all the potential moralizing traps that it could have so easily fallen into and instead delivers something that is almost effortlessly moving - an emotional blind-side that you never quite see coming from a film so modest. 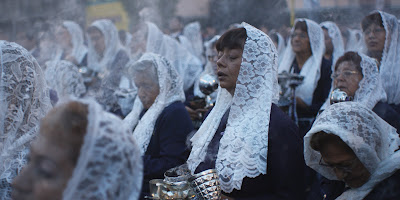 Gabriela Velásquez as Sofia in OCTUBRE. Courtesy of New Yorker Films.
Its humble attitude is actually its greatest asset. It could have very easily been one of those "cad finds redemption through a child" films. But it's not. It delivers its message in a subtle, almost unnoticeable way. It defies cliche at every turn, and even when it seems to wander, the Vegas keep it steadily on track, building up to a quietly stunning finale that hammers its point home without great fanfare. Octubre, to borrow from Carl Sandburg, works on little cat feet - nimble, graceful, and elegant.

For their first feature, Daniel and Diego Vega display a confidence of vision that is almost uncanny. It's a small film, but the emotional impact is carries is huge. It is essentially a dark comedy, but it walks a very fine line between comedy and drama that is stunning in its artistic finesse. Drawing from inspirations as disparate as Robert Bresson and Jim Jarmush, Octubre softly builds its tale of redemption into something extraordinary. It's an unexpected joy that heralds the arrival of two talented new filmmakers I think we will be hearing a great deal more about very soon.