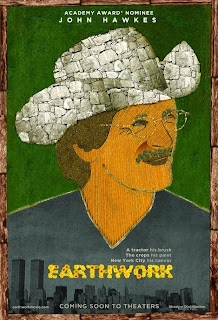 Out of all the issues I could possibly have with Chris Ordal's Earthwork, the biggest one that continues to gnaw at me is "why wasn't this a documentary?"

It's an interesting story, to be sure. But I'm not entirely certain that the final product was the best vehicle with which to tell this story. I'll admit it has a certain charm about it - a kind of Straight Story in New York City, but such a recent true life story as this one would have benefited from the documentary treatment.

In the film, John Hawkes stars as Stan Herd, a Kansas crop artist who has devoted his life to the creation of "earthworks," massive works of art made in the earth that can only be viewed in their entirety by flying over them. In 1994, he was commissioned by Donald Trump's company to create and earthwork in a vacant lot soon to be bulldozed for the construction of a new building. 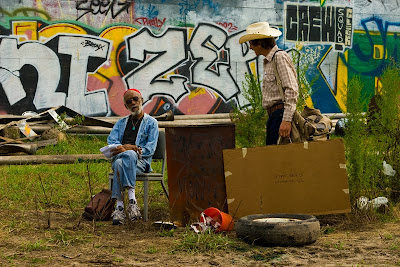 Herd beat out many other artists by covering all the costs of the earthwork himself, taking out a large loan completely unbeknownst to his wife that would also cover her college tuition. He flew to New York to begin what he thought would be a one man project, only to find the empty lot occupied by a group of disparate homeless men. Rather than kick them off the land, Herd enlisted their help, and began a work of art that would bring them all together, while threatening to tear his family apart. The project would give the men purpose and direction in their life, even as the date of the bulldozing loomed. Herd put all his hopes and dreams of making it big in this one project, pouring his heart and soul into the earthwork to end all earthworks. The end result would ultimately change them all in ways he never expected, and even though the work was only temporary, it left a lasting impression.

Earthwork is obviously a labor of love for all involved. It's impossible to fault it for its passion, it's execution, however, is somewhat mundane. There's just not enough meat to the story to justify a feature film. Not only would it have made a better documentary, it probably would have made an even better documentary short. 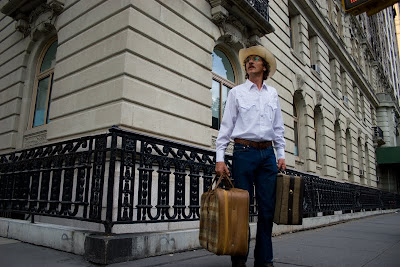 Outside of Herd, the characters never really come to life, largely in part to an almost amateurish quality to the performances, save for Hawkes, who is in fine form. The story just never seems to take off. There is little conflict or suspense, and any natural drama that seems to rise from the situations is largely ignored. A tense moment between Herd and his wife over his loan is the only real hint of a conflict, which prevents the film from being very compelling. It also never really delves into exactly how it changed the lives of the homeless men for whom it apparently touched so deeply.

Ultimately, Earthwork is a surface film. It's a nice story that is not without its charms, and the filmmaker's passion goes a long way, but when you get down to it there's really not much there. Definitely not enough substance for a feature length film, anyway. It is a story that would have been better served by a documentary rather than the oddly uninvolving film it became. There's an interesting story here, but when it is stretched over an hour and a half, it gets lost in the tedium of trying to fill a feature film.