When it comes to great movie stars, few hold a candle to the luminous Sophia Loren, whose fiery presence has been an asset to Italian filmmaking for decades. To celebrate this legendary actress, Kino Lorber is releasing three of the actress' greatest triumphs on Blu-ray and DVD, all directed by the renowned Vittorio De Sica (Bicycle Thieves).
Kino has a catalogue of classic foreign and independent film to rival that of Criterion, and while the Loren collection may not have Criterion-like extras, just having these films on Blu-ray is remarkable enough. 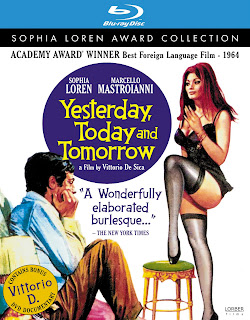 The earliest of the films is the 1964 Academy Award winner for Best Foreign Language Film, Yesterday, Today and Tomorrow, a light and frothy comedy that may come as a bit of a shock to those who only know De Sica for his gritty Neorealist films like Bicycle Thieves and Umberto D.
A lavish Carlo Ponti production from De Sica's commedia all'italiana period, Yesterday, Today and Tomorrow is a comedy in three acts, casting Loren and frequent co-star Marcello Mastroianni (8 1/2) in three different unconnected episodes as three completely different couples. In the first, Loren is a street vendor convicted of illegally selling cigarettes, and takes advantage of a law allowing for a 6 month maternity grace period by continually having kids to keep herself out of jail. In the second, she is a wealthy socialite having an affair with a working class stiff (Mastroianni) who begins to see her for the vain, shallow person that she is. And in the third, Loren is a prostitute whose beauty bewitches a young neighbor studying to become a priest, much to the chagrin of her most regular client as well as the young man's very traditional grandmother.

The third segment is the strongest and most compelling of the bunch. The middle one is much shorter and therefore less developed, but it makes its point in a strong and memorable manner. Loren and Mastroianni are a delight in all three, and De Sica demonstrates his considerable versatility by showing that he is just as adept at light comedy as he is at tragic social commentary. It's also easy to see why this was an easy film for Oscar voters to digest. And while it may not be the of the kind of weighty sentimentalism common of most modern foreign language winners, it's a real charmer that's hard not to like. Included with the 2-disc set is the 2009 documentary, Vittorio D., which chronicles the director's long and varied career, offering a deeper insight into his craft. 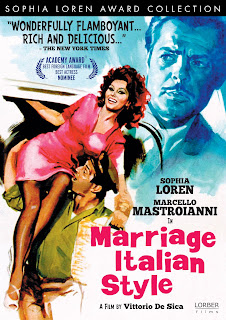 The real jewel of the collection, however, is 1964's Marriage Italian Style, which garnered a Best Actress Oscar nomination for Loren, as well as yet another Best Foreign Language Film nomination for De Sica. It showcases a wacky screwball plot with Loren as the common longtime mistress of aristocrat Mastroianni who is furious when she finds out that he is marrying someone of higher status. So she devises a series of outlandish plans to try and win him back, including faking a life-threatening illness and claiming to have mothered a child he had no knowledge of.

It's a romantic comedy every bit as delicious as something Howard Hawks might have concocted, with Loren and Mastroianni proving fine rivals for the likes of Katherine Hepburn and Cary Grant. The only problem is that the film stock has aged very badly, and even on Blu-ray it suffers from degraded image quality marked by intense grain and scratches. It's in bad need of a restoration, and of the three films in the collection it benefits the least from the Blu-ray treatment, the sharp HD almost making the grain worse.

That is not to suggest that older films must all be rendered grain-free by Blu-ray, but in the case of Marriage Italian Style, the grain is a result of badly aged film stock rather than an extension of its personality. Yesterday, Today and Tomorrow and Sunflower both feature gorgeous transfers, with colors that pop and just the right amount of grain. It's a shame that the finest film of the bunch has aged the worst. Still, it doesn't take away from the film's inherent charms, which remains a comedic masterpiece every bit as funny and touching as it was nearly 50 years ago. 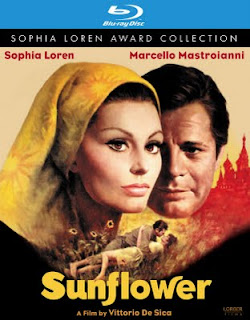 The most beautiful of the three films is 1970's Sunflower, a grand melodrama with Loren (in one of her most powerful performances) as a devoted Italian wife whose husband goes missing on the Russian front during WWII. With no news and little help, she sets out for the snow-swept fields of Russia to find her love and bring him back, even as time and fate work against her. The only film of the trio that isn't a comedy, Sunflower is a sweeping drama that garnered an Academy Award nomination for Henry Mancini's gorgeous score. De Sica's roots Neorealist roots show their face a little more here than in his comedies, but in this case there is a bit more of a decidedly Hollywood flair. Rather than a Neorealist social commentary, Sunflower is a grand, even pulpy entertainment, filled with underlined emotions and tragic romance. There's an almost David Lean quality at work here, even in the epic battle scenes that tell the story of the Italian army's ill fated excursion into Russia. It also features the most pristine transfer of the set, made even more impressive by the vibrant high definition of the Blu-ray.

In the three films presented here, Loren plays no less than five different characters, showcasing her considerable talent in three varied films from one of cinema's supreme artists demonstrating his considerable versatility. For newcomers to De Sica's work, these films will provide an easily digestible introductions to one of the medium's most revered auteurs. For his fans, it will open up a thrilling and lesser known chapter of his work. For Loren devotees, this is a must-have collection, a consummate set of some of her strongest work. Available either as a DVD box set or as individual Blu-rays, Kino's Sophia Loren Award Collection is yet another welcome addition to the company's considerable catalogue that continues to surprise and impress.