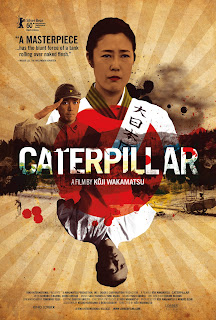 Got your attention yet?

While not necessarily as grotesque as Tom Six's infamous 2010 horror film about a mad doctor who attaches his victims mouth to anus to create one long digestive system, Caterpillar is still a rough sit. Messy, oppressive, and intentionally rough around the edges, it's a wrenching film in more ways than one.

In fact that may be its biggest problem. It is a film with a very clear symbolic goal, but it hammers at it with such singular ferocity that it makes its point quickly and then becomes overwhelming and ultimately redundant. Its central concept walks a fine line between the sordid and the tragic, but the final result is more off-putting than emotionally moving. Wakamatsu obviously has something very powerful at work here, but Caterpillar is one tough piece of work. 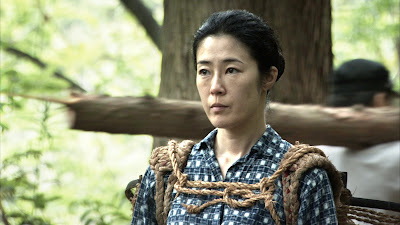 Actress Shinobu Terajima as Shigeko Kurokawa in CATERPILLAR, a film by Kôji Wakamatsu.
Courtesy of Lorber Films.
Set during World War II in Japan, Caterpillar is the story of Shigeko, a faithful military wife whose husband is returned from the war missing both arms and both legs. Saddled with taking care of her helpless husband (and tending to his sexual needs), Shigeko finds herself overwhelmed with the task at hand. To the entire nation, her husband is a war god, a living legend, a hero. But Shigeko knows the truth, and his demands become increasingly difficult, as all he does is eat, sleep, and have sex. As she struggles to support him, she also struggles to present a brave face to a world that considers her plight an honor, and an essential service to the nation and the Emperor, to care for his wounded "war god."

As her frustrations grow, so do her husband's demands, as the controlling and abusive man he once was begins to show even in his deaf and dumb state. But unbeknownst even to Shigeko, he hides a dark secret of terrible deeds done on the Chinese front lines. He is not the hero he has been celebrated as by the Japanese propaganda machines, and soon he will find the tables turned on him as karma finally catches up. 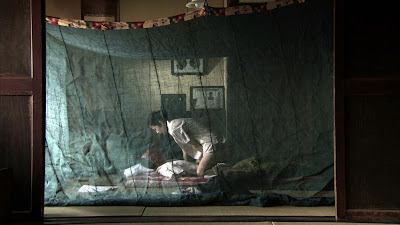 Actress Shinobu Terajima as Shigeko Kurokawa in CATERPILLAR, a film by Kôji Wakamatsu.
Courtesy of Lorber Films.
At the center of this tense drama is Shinobu Terajima's powerful performance as Shigeko. She holds the film together and is compulsively watchable, even when the film itself seems to veer into unnecessary histrionics near the end. For a film so shrouded in somber import, it seems strangely shrill, taking an in-your-face approach rather than a more subtle one. There is something to be said for that, of course. Wakamatsu has crafted a clear critique of blind nationalism and the right wing propaganda machine of WWII-era Japan, as a juxtaposition for his left wing critiques in United Red Army (Lorber, 5.27). Shigeko's husband is the very embodiment of such blind polices - deaf, dumb, and lame. Legless, armless, and ultimately useless, Wakamatsu delivers a raging blow against baseless militaristic patriotism.

Caterpillar isn't a whisper, it's a battle cry. It's deliberately rough and uncomfortable, but what it has in sheer thematic power it looses in subtlety. It throws so much at the audience that it becomes abrasive, and is ultimately less effective. Wakamatsu's insistence on reminding us of facts and figures from WWII suggests grander themes than the intimate focus of his film, but it also seems like an unnecessary distraction. It almost feels as if he's hammering his point home too hard, where a lighter touch would have been more effective. It's difficult not to admire the clarity of his vision, but in the end its over-the-top nature seems to undercut his message.