Review | "I Travel Because I Have To, I Come Back Because I Love You" 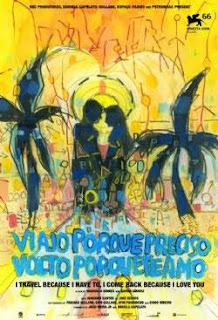 One of the great joys of being a film critic is discovering hidden gems that go unnoticed by the majority of moviegoers. Some even escape the notice of most critics, and that is often where you find some of the most remarkable films. One of my favorite such discoveries of 2011 is Karim Aïnouz and Marcelo Gomes' extraordinary Brazilian oddity I Travel Because I Have To, I Come Back Because I Love You.

It is a rare thing indeed to find a film that can be called wholly original, but I can honestly say I've never seen anything quite like it before.

Filmed like a first person travelogue, I Travel Because I Have To, I Come Back Because I Love You is the story of a never seen narrator (Irandhir Santos) on a business trip to survey land that will be flooded to build a new canal. He has just gone through a painful breakup with a woman he loved deeply, and is finding it difficult to get her off his mind. He buries himself in his work, scouting out the best location for the canal and meeting with villagers whose lives would be forever altered by its construction. 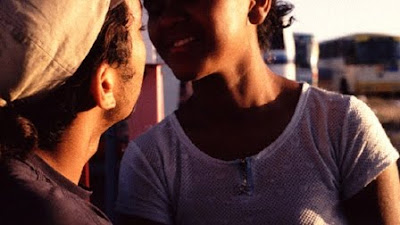 Soon the gravity of their situation begins to weigh on him. The haunted eyes of elderly villagers who have lived their entire lives in the same modest hut, only to see it washed away by a new canal in their twilight years, pierce his soul. He begins to identify with their loneliness, their desperation, and slowly but surely he begins to move on and recover from his own personal wounds, the plight of the villagers and the freedom of the open road setting him on the path to emotional healing.

Shot in grainy digital video, the film takes on the personality of personal slideshow, a document of our narrator's journey made by the narrator himself. We never see his face, he is always behind the camera, commenting on what he sees, and it gives him a strange sense of anonymous universality. He could be anyone, and the first person cinematography allows the audience to put itself into his position - to in essence become the narrator. 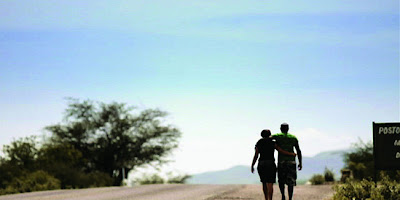 The raw, unpolished look of the film gives it an unusual and often breathtaking beauty. The grainy visuals and shaky style that could be a hindrance to some films, is here an extension of its lyrical personality. At only 75 minutes long it may seem short, but it's actually a perfect length to achieve its goals. It's a breathless whisper, a hushed and powerful cinematic poem culled from rough-hewn elements into a disarming piece of cinematic art.

Films like this don't come along very often, and that is part of its strength. It is a genuine, honest and even cathartic work, a unique and singular take on love and healing that is also a wrenching portrait of the often unseen human toll of technological progress. It is a favorite theme of Chinese director Jia Zhangke (Still Life, 24 City), but Aïnouz and Gomes dig deep an emerge with a completely original and evocative film that is unlike anything we've seen before. I Travel Because I Have To, I Come Back Because I Love You may have an unusual title, but this deeply personal paean to the broken hearted is a thing of true and rare beauty that leaves a lasting impression.

I TRAVEL BECAUSE I HAVE TO, I COME BACK BECAUSE I LOVE YOU | Directed by Karim Aïnouz and Marcelo Gomes | Stars Irandhir Santos | Not rated | In Portuguese w/English subtitles.
Email Post