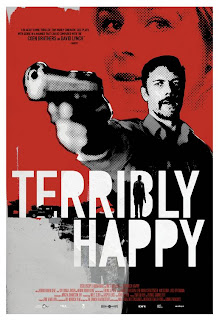 From the very first frame, it is readily apparent things aren't quite right in the world of Terribly Happy. Henrik Ruben Genz's thrillingly off-kilter modern noir wastes no time putting the audience on edge with a mysterious voice-over story about a swamp that swallows a small provencial town's dirty little secrets, in this case, a legend that left the town quite mad.

It is into this world that policeman Robert Hansen arrives from Copenhagen, assigned to be the rural town's new marshal as his first assignment after a nervous breakdown that put him out of commission. From the moment he arrives, he is greeted with suspicion by the locals, who are very set in their often odd ways. Hansen finds it hard to adjust, as locals expect him to beat child offenders rather than arresting them, and other things that the old marshal used to do that go against police protocol. As he tries to get used to the town's quirks, he soon discovers its dark underbelly. People have been mysteriously disappearing here, but most people treat it like business as usual. That is except for Ingerlise, a local woman seen as a crackpot by most people in the town. Known for constantly accusing her husband of domestic abuse, an accusation often dismissed by the old marshal, Ingelise approaches Hanson with distressing news. 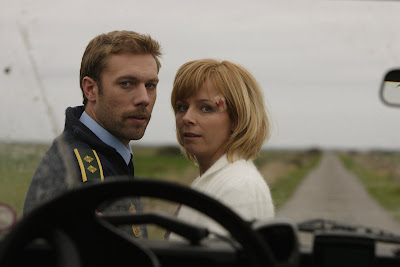 Soon Hanson is caught in an uncomfortable position, between his newfound feelings for the beautiful and mysterious Ingerlise, the will of the people of the town, and her volatile husband Jørgen, a well respected father and member of the community. But when a shocking murder rocks the little town, everything begins to change, and Hanson finds himself in an increasingly desperate situation in a town whose dark secrets are always swallowed by that mysterious bog.

The title of Terribly Happy is ironic of course. It's a small town paradise straight out of David Lynch, a model of small town perfection barely masking the rot underneath. Genz directs like a Danish member of the Coen brothers, often times recalling Fargo in its portrait of strange small town citizens. The film is nothing if not darkly funny, using the unnerving situations to find humor in the characters' bizarre actions and personalities Genz wisely uses that subtle blend of humor to create something truly disquieting. Hanson feels it and the audience feels it, this town is just wrong, even though concrete proof of anything is hard to come by, other than just a creepy feeling. 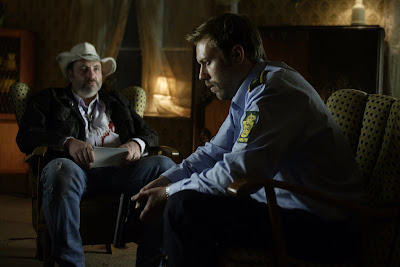 There is a greeting in this town that sets the tone for his experience - mojn, which means both hello, and goodbye. Its use in the film becomes a sort of eerie calling card, the town's way of warning newcomers to "do things our way, or face the consequences." When even the sound of a cat's meow begins to resemble the word, we know we've gone way off the beaten track. Is the town mad? Is Ingerlise? Is Hanson? What of the old marshal? Genz uses these questions to craft a haunting and compelling narrative, one of the finest examples of film noir in recent years. His sense of style and pacing is fantastic, ratcheting up the tension without pushing his boundaries.

Based on a true story, Terribly Happy remains grounded in reality while still maintaining just a touch of the surreal, keeping the atmosphere just off-balance enough to keep the audience in a perpetual state of unease. In an interview, Genz said the story reminded him of a Western, in which "a foreigner comes to town and all hell breaks loose." And that makes sense, it's a noir-ish Western set in Denmark, a film of delicious moral ambiguity and complexity that lures the audience in with its strange and terrible beauty. This is the kind of exciting and original filmmaking we need more of, and to see such a thrilling example so early in the year means that the rest of 2010 has a tough act to follow, because Terribly Happy has set a very high bar.

nate said…
Never even heard of it. Will have to check it check it out.
6:48 PM