Seeing this For Your Consideration ad for Peru's Best Foreign Language Film nominee The Milk of Sorrow just reminds me of how ridiculous, and how heavy handed, its symbolism is. 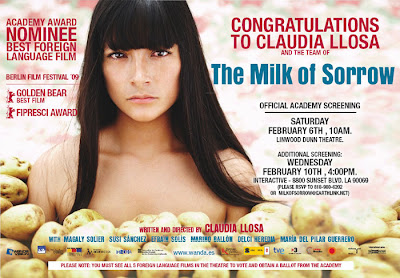 Anyone who has seen the film knows what I'm talking about. The main character (who was said to have drank the 'milk of sorrow,' breast milk from women who endured great stress, ensuring the same for her) puts a potato in her vagina to keep from getting raped as a child, and it begins to sprout and cause problems later in life, as her mother dies and the ramifications of her troubled childhood begin to catch up with her (Get it? GET IT!?), and each time she makes some forward progress, she trims a sprout (SYMBOLISM!). And now we have this poster of her...buried in potatoes. Yeah...

The film, which follows her quest to give her mother a proper burial at all costs, is beautifully shot, and is reasonably engaging, but the symbolism is borderline silly, often coming off as some sort of parody of a dour, pretentious art film. It took the spot that should have gone to Bulgaria's wonderful The World is Big and Salvation Lurks Around the Corner. And don't even get me started on Argentina's bland El Secreto de sus Ojos...
Email Post

Bostons Obscurity - Cinema for the curious mind said…
hehe.. It's a fantastic film!!