This doesn't have anything to do with movies, but since US Olympic figure skater Johnny Weir has starred in the documentary, Pop Star On Ice, I'll say it does and talk about it anyway. 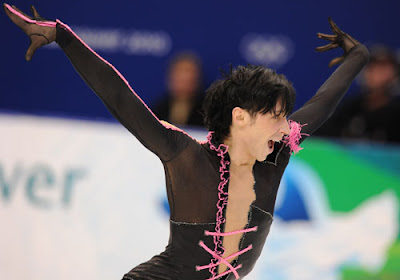 Weir was fabulous during his long program last night, just as he was during his short program on Tuesday, and each time his score was appallingly low. The Olympic judges should really be ashamed. Weir is a consummate artist and entertainer, and no one showed as much flair or personality on the ice as he did. He may not have deserved gold over eventual winner Evan Lysacek, but he should have been standing up there on that medal podium with him. Sixth place is just a travesty. The way the NBC commentators peppered their comments with backhanded compliments and condescension, as if they don't take him seriously, was also appalling.

Rock that tassel, Johnny! We all know just how good you really were.

You can view his entire, beautiful short program routine here.

Anonymous said…
The Australian commentators have been just as bad (if not worse):

The NBC code-word of choice is "free-spirit."

"There's Johnny Weir! He's known for his controversial comments off the ice. Such a free spirit."
3:11 PM