Cell 211 and Agora were the big winners at Spain's Goya Awards last night, taking home 9 and 7 awards, respectively, with Cell 211 walking away with Best Film. 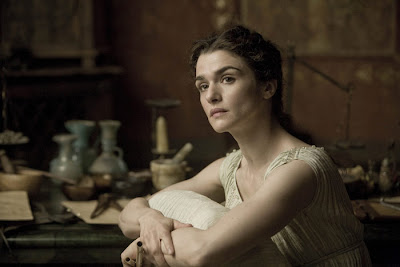 Rachel Weisz as Hypatia in AGORA.

I have mixed feelings about Agora, Alejandro Amenabar's historical epic about Hypatia, the noted philosopher and astronomer, who was executed by Christians in Alexandria for her heretical ideas about heliocentricity and the like. On the one hand it's an epic tragedy about knowledge standing up in the face of ignorance, as the unstoppable tide of Christianity rises up in the ancient world, destroying most of the collected knowledge of man in the famed library at Alexandria. I found it interesting from a historical point of view. But as a film it's only middling.

Agora is a film that is inherently academic by the very nature of its story. It is a film about an ancient philosopher trying to discover the truth about the cosmos, which I personally found interesting but cinematically speaking it isn't portrayed with much flair or personality. The film is often painfully straightforward, playing out more like a history lesson than a film, with two undercooked love stories providing emotional framework. Max Minghella's storyline, as a slave who falls for Hypatia is especially underwritten.

I get the feeling that this is the kind of thing that will become a staple in high school history and science classes. It has yet to receive a US release date, but I don't think it will play particularly well here. This was not a pretty event for Christianity. Agora is a paean to reason and thought standing against ignorance and religious intolerance, a kind of thinking man's Passion of the Christ. The problem is that it lacks The Passion's personal fire. It is cool and often distant, as one would expect from the subject matter. Amenabar does a good job of placing the religious conflicts in context with Hypatia's reality that Earth is "just another wonderer," a speck of dust in the heavens. But ultimately the film is just a well produced history lesson with some unnecessary romantic conflicts thrown in to add emotional weight. It's a History Channel special, one that succeeds and holding interest but lacks that passionate spark to make it truly soar.
Email Post