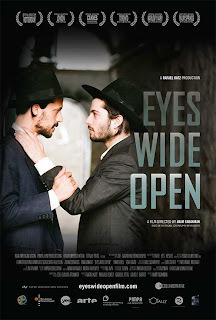 The very idea of Haim Tabakman's Eyes Wide Open is rife with material to turn into a cosmic joke. Set in a conservative, Jewish Orthodox community in Jerusalem, the film tells the story of Aaron (Zohar Shtrauss), a married butcher and father of four whose father has just passed away. His father's death has left a void at the family butcher shop, which Aaron must now run on his own. So he puts out a help wanted sign hoping to attract a new employee to help lighten his work load, attracting the attention of a young student named Ezri (Ran Danker), who ducks into the shop one evening to get out of the rain.

Aaron offers the young man a job, and his father's old room in the butcher shop while he looks for a new school and more permanent lodgings. But it soon becomes clear that Ezri comes with some baggage, and an unknown troubled past. Aaron recognizes his talent and promise, however, and takes an interest in him, an interest that soon turns to desire. But soon neighbors begin to learn of Ezri's past, leading to suspicions about Aaron, scandalizing the small, Orthodox community and causing them to begin a campaign of ostracism and intervention born out of religious intolerance. 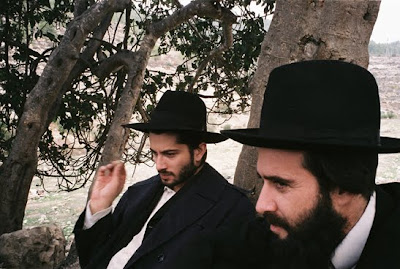 Like Brokeback Mountain before it, Eyes Wide Open takes a gay love story and places it the most unlikely of places. It's the kind of thing that almost has Saturday Night Live parody written all over it, with Orthodox Jewish men with their trademark hats and long beards making out and endless references to meat in the butcher shop. In the wrong hands, this could have been an epic disaster. Instead, Tabakman treats it with dignity and respect, even tenderness.

It would be hard to classify it as a love story, however. It is ultimately a rather stark examination of the effects of the suppression of desire due to religion. Aaron is a family man, with a strong faith in God, a pillar of his community. He is routinely called upon for the kind of intervention that he himself is eventually subjected to, bullying other community members into compliance with religious law. But his tentative and awkward relationship with Ezri awakens something in him. He tells a rabbi that until he met Ezri, he had been dead. Now he is alive, and his eyes are wide open. 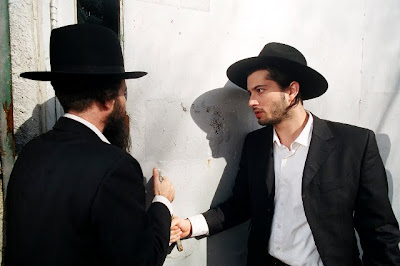 It is a quietly powerful look at a love that defies tradition and place, surfacing amidst strong religious and social opposition. This is no fairy tale love, though. Eyes Wide Open is not a "love overcomes all obstacles" kind of story. It is a dark, almost tragic tale, but deftly avoids many forbidden gay love cliches. It's biggest flaw is its lack of development of the relationship between Aaron and his wife. His dalliance with another man doesn't seem to affect his family much. His wife, Rivka, merely suffers in private. The ramifications of his relationship with Ezri are mostly social and internal. It is no less devastating for that, but it is definitely an aspect in which Eyes Wide Open lacks.

Despite those imperfections, Tabakman gracefully delivers something both unusual and powerful, an austere cultural portrait of suffocating religious adherence, and its effects not just on the community and people's relationships, but on the soul itself. Aaron's eyes may be open, but his heart is forever scarred by a culture that insists his desires are wrong, unnatural, and an abomination, while Ezri, who has learned to accept himself, lives as an outsider. It is the film's unadorned simplicity that sticks in the memory, distilling complex social and religious prejudices without judgment or condescension, and with just a little more development, it would truly soar.