For the Love of Movies

Chris Jones has written a beautiful and moving profile of Roger Ebert since the surgeries on his jaw that have left him without a voice, in the latest issue of Esquire magazine. I honestly had no idea the surgeries had gone as far and were as dire as this, and Jones provides some graphic insight into Ebert's current health struggles. 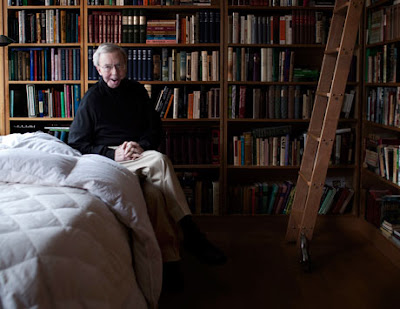 It's probably the best piece of its kind of read in a long time, absolutely essential reading for fans of Ebert and fans of film in general. The man is a legend, and Jones' tribute is clear eyed and often very sad, yet strangely hopeful. Here's a brief excerpt:

Roger Ebert can’t remember the last thing he ate. He can't remember the last thing he drank, either, or the last thing he said. Of course, those things existed; those lasts happened. They just didn't happen with enough warning for him to have bothered committing them to memory — it wasn't as though he sat down, knowingly, to his last supper or last cup of coffee or to whisper a last word into Chaz's ear. The doctors told him they were going to give him back his ability to eat, drink, and talk. But the doctors were wrong, weren't they? On some morning or afternoon or evening, sometime in 2006, Ebert took his last bite and sip, and he spoke his last word.

Ebert has done a lot of living on the internet in the time since the surgery, both on his blog and on his prolific Twitter page, showing off not just his knowledge of film but politics and other issues as well. His unapologetic liberalism may have earned him a few enemies in certain circles, but Jones' article reminds us why we loved Ebert to begin with, and chances are, after this, we will never look at him the same way again.
Email Post