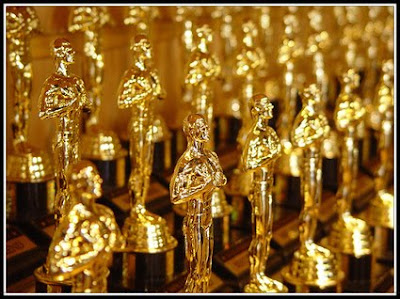 I'm not going to lie, the more I hear about what telecast director Adam Shankman is doing to the Oscar ceremony this year, the more annoyed I become. I was excited at first at the prospect of having the director of Hairspray behind the telecast, but this latest tidbit of information from Nikki Finke seems to confirm my greatest fears:

Oscarcast executive producers Adam Shankman and Bill Mechanic have dropped a bombshell, telling artists nominated for Best Original Song that they won’t be invited to perform the usual big production number. The decision has hit a sour note for the nominated performers. Instead of the Academy Awards' long-held tradition of staged musical performances of the five nominated songs, the music from those songs will be interspersed with footage from each movie to provide more context. I’m told that some of the nominees and filmmakers are outraged, feeling that the Oscar producers are tossing aside tradition and costing musical artists their well-deserved moment of global TV glory. What the Academy Awards telecast producers will certainly do is shave time that can be spent doting on twice as many Best Picture nominees as in years past. And this year in particular, that is a big priority. Never mind that the Academy Of Motion Picture Arts & Sciences already decided this year to limit the number of Original Song nominees to speed up the Oscar broadcast.

Yep, the Best Song performances are out. Shankman has invited dancers from So You Think You Can Dance and has promised lots of dancing and other such trappings, and in the process it seems as if he's steamrolling the dignity of the event in favor of a more reality show styled show. Saying things about how the songs have never delivered ratings, which is the point, gives me great pause. It would be naive of me to say it's not about the ratings, but the trend over the last few years, especially with the inclusion of 10 Best Picture nominees this year, has been to get ratings, when it should be about honoring the films and the artists who make them. The more populist the Oscars try to become, the more irrelevant they eventually become. History won't remember them well for this.

darkmoon3d said…
Song changes doesn't sound that bad. At least they are playing the songs rather than cutting them entirely. I just hope they don't do that thing they did last year by having 5 presenters for each acting award. Seems like simply showing a clip from movie is easier and traditional rather than having someone say how great they are. Oscars have tried other incredibly insulting ideas like several years ago they presented tech awards to people in their seat (04 I think it was).
8:02 PM

Daniel said…
What a bunch of crap! I was so looking forward to The Weary Kind and the two songs from Princess/Frog. This is an outrage.
12:19 PM