Hope you all enjoy this as much as I did. Merry Christmas! 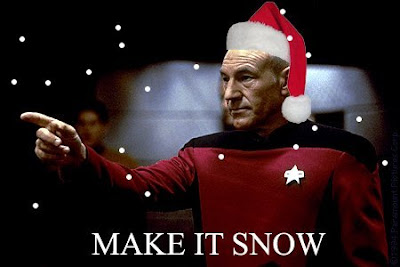 'Twas the night before Christmas, when all through the ship
Not a circuit was buzzing, not one microchip;
The phasers were hung in the armory securely,
In hopes that no aliens would get up that early.

The crewmen were nestled all snug in their bunks
(Except for the few who were partying drunks);
And Picard in his nightshirt and Bev in her lace,
Had just settled down for a neat face-to-face...

When out in the halls there arose such a racket,
That we leapt from our beds, pulling on pants and jacket.
Away to the lifts we all shot like a gun,
Leapt into the cars and yelled loudly, "Deck One!"

The bridge Red-Alert lights, which flashed through the din,
Gave a lustre of Hades to objects within.
When, what, on the viewscreen, should our eyes behold,
But a weird kind of sleigh, and some guy who looked old.

But the glint in his eyes was so strange and askew
That we knew in a moment it had to be Q.
His sleigh grew much larger as closer he came.
Then he zapped on the bridge and addressed us by name:

As leaves in the autumn are whisked off the street,
So the floor of the bridge came away from our feet,
And up to the ceiling our bodies they flew,
As the captain called out, "What the hell is this, Q?!"

The prankster just laughed and expanded his grin,
And, snapping his fingers, he vanished again.
As we took in our plight and were looking around,
The spell was removed, and we crashed to the ground.

Then Q, dressed in fur from his head to his toe,
Appeared once again, to continue the show.
"That's enough!" cried the captain, "You'll stop this at once!"
And Riker said, "Worf! Take aim at this dunce!"

"I'm deeply offended, Jean-Luc," replied Q,
"I just want to celebrate Christmas with you."
As we scoffed at his words, he produced a large sack.
He dumped out the contents and took a step back.

"I've brought gifts," he said, "just to show I'm sincere.
There's something delightful for everyone here."
He sat on the floor and dug into his pile,
And handed out gifts with his most charming smile:

"For Counsellor Troi, there's no need to explain.
Here's Tylenol-Beta for all of your pain.
For Worf I've some mints as his breath's not too great,
And for Geordi LaForge, an inflatable date.

For Wesley, some hormones, and Clearasil-Plus;
For Data, a joke book; for Riker, a truss.
For Beverly Crusher, there's sleek lingerie,
And for Jean-Luc, the thrill of just seeing her that way."

Then he sprang to his feet with that grin on his face
And clapping his hands, disappeared into space.
But we heard him exclaim as he dwindled from sight,
Merry Christmas to all, and to all a good flight!

Sam Juliano said…
Real nice! That reminds yet again that STAR TREK must seriously be considered for the year's Top Dozen best films. It's a crowded field, and I'm still struggling with it, as I'm sure you are as well.
1:25 PM

Sam Juliano said…
In trying to guess what Matthew Lucas will be including in his top ten or top twelve, I will say that you'll have either ANTICHRIST or UNMISTAKEN CHILD at #1, but I favor the former. We''to see how it all pans out, but that's my sneak-peak. The Von Trier will absolutely be in my own dozen.
1:28 PM

Matthew Lucas said…
My top ten will most likely be up Wednesday. It will probably include a few surprises. ;-)
7:28 PM